How to Make a Restaurant-Quality Baked Potato

How to Make a Restaurant-Quality Baked Potato

My ex-husband did not know how to cook many things, but he was always willing to learn. I’ll never forget one 76-degree December evening (we lived in Florida) when he called from the other room: “Hey sweetie, I have a couple of questions.” “What?,” I asked. “Uh, first, how do you bake a potato? And is a Christmas tree supposed to have this many spiders?”

In his defense, he never celebrated Christmas growing up, so there was no way for him to predict the thousands of baby arachnids that were making their way from our—first, as a married couple—Christmas tree. But the 29-year-old man should have known how to bake a potato.

In terms of sides, there are times when nothing but a baked potato will do. They’re not a difficult dish, but a crispy-skinned, fluffy-on-the-insides potato requires two things: fat and patience. Sure, you can get the innards done with the help of a microwave, but you won’t get that crisp, salt-crusted skin, and I can’t imagine why you would want to forgo that.

The smallest baked potato is going to take at least 45 minutes in the oven, and that’s okay. I’m sure you have a task you need to do that will take at least 45 minutes to complete. Besides chilling the eff out and letting your oven do its thing, I have a few other principles for making the best baked potato, whether it’s destined to accompany a steak, or be filled with chili or some such.

I don’t mess with small potatoes. If you are intending to fully load it, and I suspect you are, a tiny spud isn’t going to be equipped to handle all you throw at it. Though a large potato might take longer than a little potato to cook, you’re looking at an extra 10 minutes or so, and an extra 10 minutes of waiting is worth extra potato. 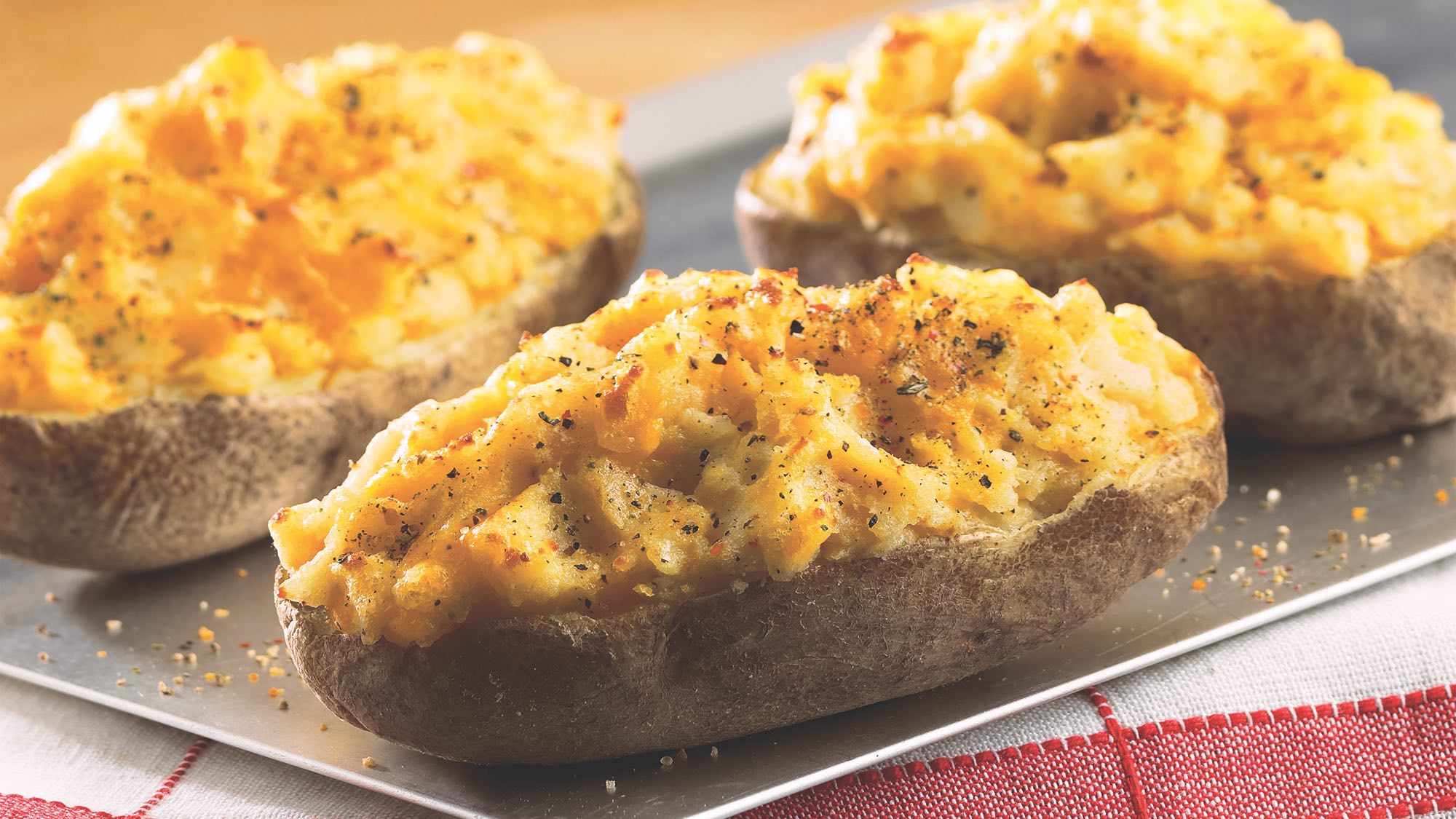 Slather it in fat and coat it in salt

Members of the Crispy Skin Club know that fat is key. If you “don’t eat the skin,” it’s probably because you haven’t been slathering it in enough schmaltz. Nothing wrong with using vegetable or olive oil, but duck fat, chicken schmaltz, and bacon grease lend a nice smoky flavor that screams “steakhouse.” Once that’s done, coat it in salt. One teaspoon per potato is the minimum.

Chill the freak out

The key to cooking patiently is rebranding “waiting for food” as “me time.” You don’t need to watch your potato bake, so have a cocktail in the tub, stalk someone on the internet, or sous vide a steak. You can also use this time to prep the things you would like to stuff into your hot potato, so fry some bacon, grate some cheese, and chop some chives. (Oh, and set some butter out so it can come to room temperature.)

With these guiding principle firmly in mind, you are ready to bake a potato. To do so, you will need: 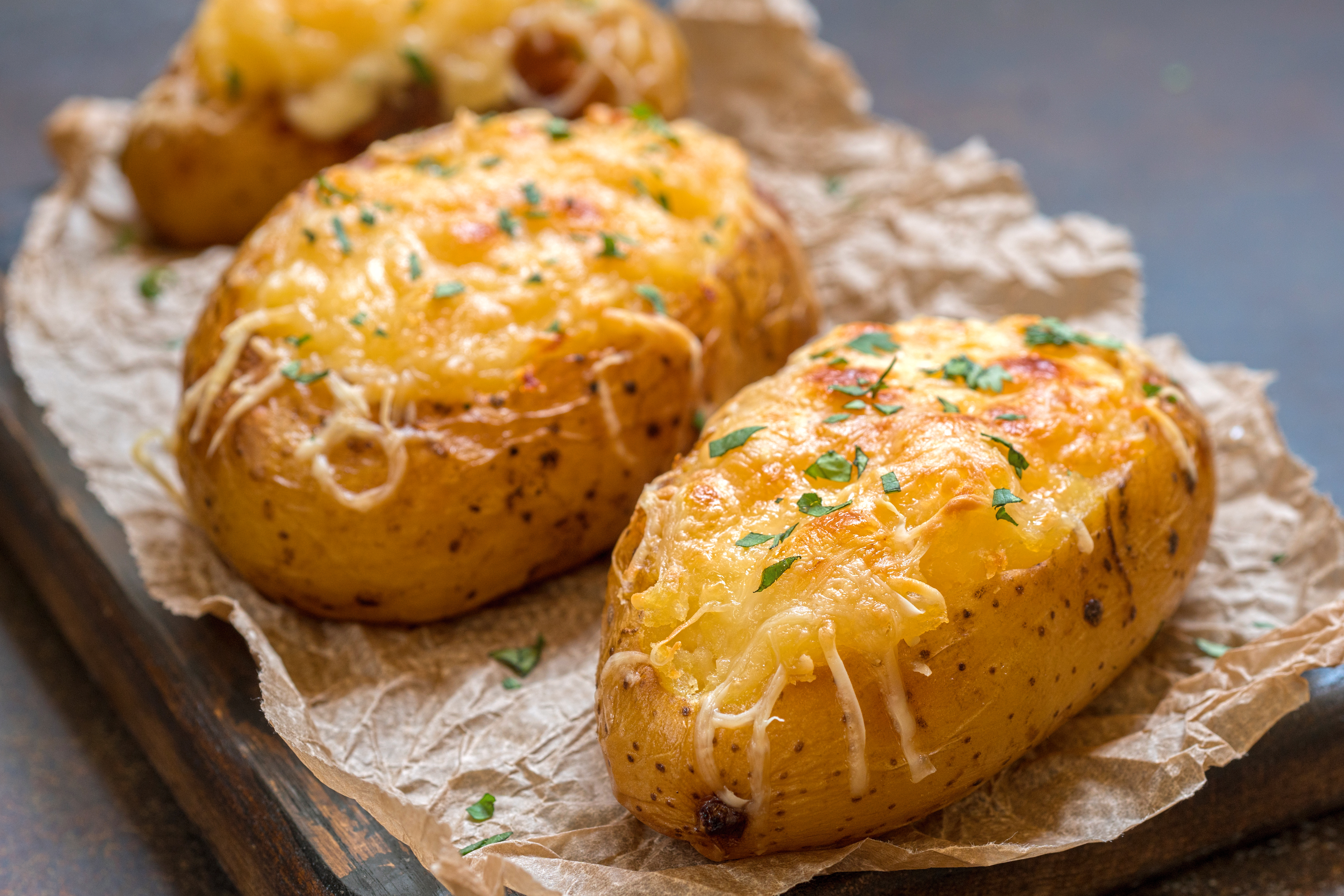 Preheat your oven to 425℉ and give your potato a good scrub under cold running water. Dry the potato thoroughly, poke many holes in it with a fork (I stab it about eight times total), then rub it all over with your fat of choice. Assault it with salt, then place it directly on the center rack of your oven. Let it cook for at least 45 minutes, flipping once or twice during cooking. Most potatoes will take an hour; you’ll know they’re done when the skin is crisp and the insides feel completely soft when you stick a fork into the potato. Remove your potato from the oven, let cool for five minutes, then slice open with a sharp knife and load it up.