Typically, I don't ask my fiance what he wants for dinner, because his answer is always the same: Dragon Express. (Seriously, he would eat Chinese takeout over homemade cooking any day.) I made an exception recently, and he threw me a serious curveball. "Chicken Cordon Bleu!" he exclaimed. This was odd, mainly because, in our four-plus years together, I'd never heard him so much as mention this dish.

I honestly believe he shouted the most random thing he could think of, never imagining it might actually come to fruition. Then again, the boy lives with a food writer. He should come to expect these things.

I glanced at a few recipes online; then I took stock of my refrigerator. I had chicken breasts because I always have chicken breasts. I didn't have ham but I had pancetta (even better). No Swiss cheese but there were a few slices of Havarti. It could be done! An hour later, dinner was on the table: crispy Chicken Cordon Bleu drenched in a cheesy Mornay sauce, whipped cauliflower mashed potatoes, and a crisp arugula salad. Well, just hand me an apron and call me Mrs. Cleaver!

Later, I got the idea that Chicken Cordon Bleu had the makings of a great sandwich. After all, it contains all of the same flavors as my cherished croque monsieur, albeit with chicken instead of bread. And with that, my Chicken Cordon Bleu Croque Monsieur love child was born.

This is a happy-weekend-to-me kind of lunch, a lunch that is meant to be shared. And while I nibbled this sandwich while lounging on the couch still in my PJs, who's to say you shouldn't enjoy it picnic-style, with a pile of spring lettuces tossed in Dijon vinaigrette and a few glasses of chilled champagne. Vive la France! 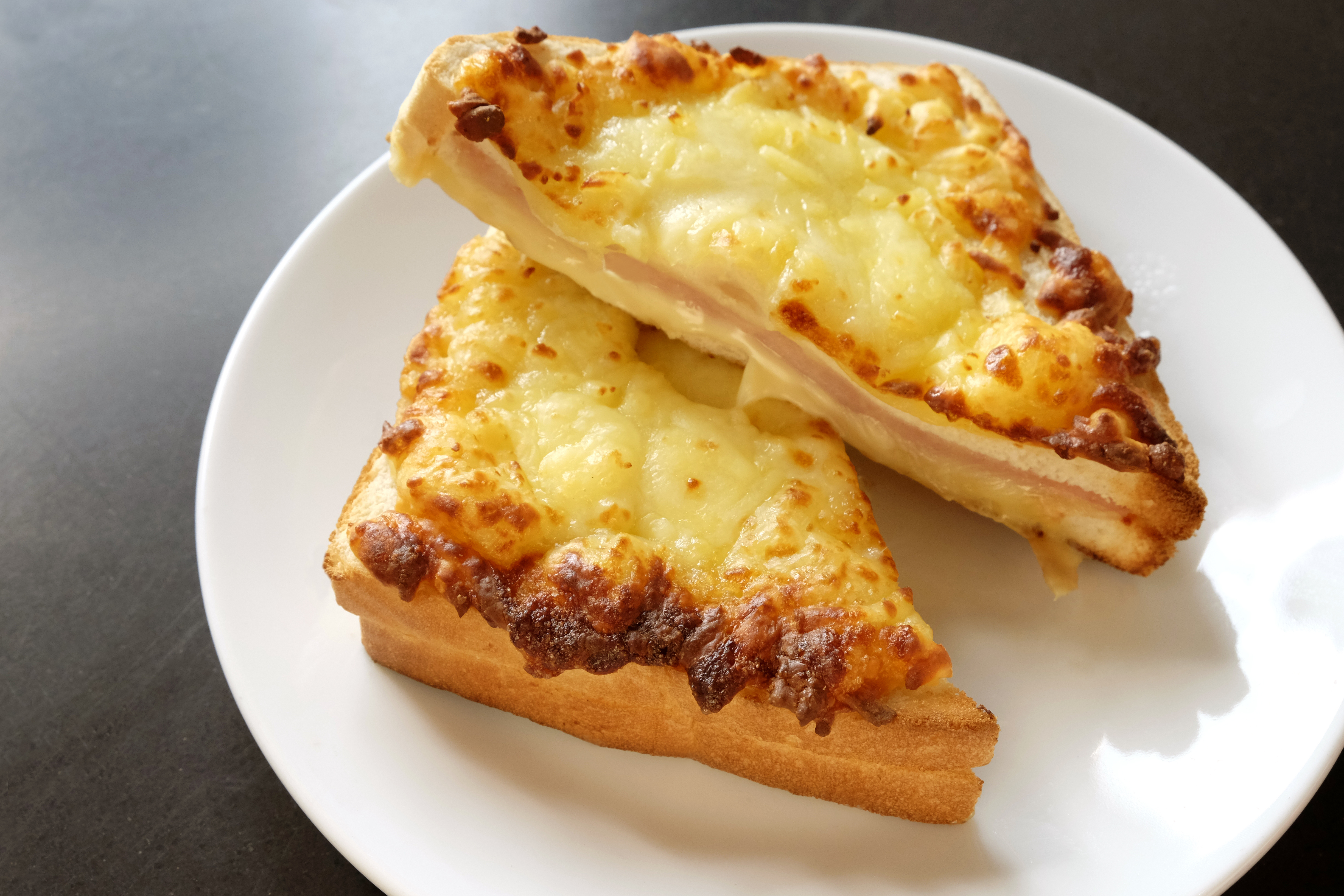 1 cup whole milk or half and half, scalded

For the chicken, preheat oven to 400 F. Slice the chicken breasts horizontally from tip to tip, holding the knife parallel to the cutting board, to create two long cutlets. Place the cutlets into a large Ziploc bag and pound with a meat mallet to an even thickness.

Mix together the panko crumbs, butter and garlic powder. Have three shallow bowls (I like to use cake pans) set aside. Add flour to one bowl, egg to another, and the panko mixture to the last. Season each mixture with salt and pepper.

Dredge each cutlet first in the flour, then the egg, and lastly in the panko mixture, making sure to coat the meat evenly. Place the cutlets on a baking sheet and cook for approximately 18 minutes, or until the chicken is cooked through. Finish under the broiler for two minutes, or until they are golden brown.

Butter each slice of bread on one side. Place on a baking sheet, buttered side up, and put in the oven with the chicken. Cook until the bread is toasted, about 15 minutes. (The chicken and bread should finish about the same time.)

Meanwhile, make the Mornay sauce. Melt the butter in a small saucepan on medium-low heat. Add flour and whisk until smooth (and the flour taste is cooked out), about one minute. Pour in scalded milk and cook until the sauce thickens, approximately 3-5 minutes. (If the sauce is too thick, add a couple more tablespoons of milk until it reaches your desired consistency.) Add the mustard powder, sherry, and salt and pepper to taste. Reduce heat to low and stir in 1/2 cup of Parmesan until melted. Season again, to taste. Keep the sauce on low heat, stirring occasionally, until ready to assemble the sandwiches.

Place a chicken cutlet on top of a slice of bread. Top with two slices ham, a couple slices of cheese, and another slice of bread. Spread a generous amount of Mornay sauce and Parmesan cheese over the sandwich. Repeat. Bake the sandwiches for approximately 8 minutes, then finish off under the broiler for a couple of minutes until the cheese inside the sandwich is melted and the top is golden brown. Serve immediately.

(Nealey Dozier is a writer for TheKitchn.com, a nationally known blog for people who love food and home cooking. Submit any comments or questions to kitchn@apartmenttherapy.com.)

This article is written by Nealey Dozier and TheKitchn.com from The Kitchn and was legally licensed via the Tribune Content Agency through the NewsCred publisher network. Please direct all licensing questions to legal@newscred.com.