How to Make Korean Fried Chicken Wings at Home

How to Make Korean Fried Chicken Wings at Home

Since the late 1990s and early 2000s, Korean Fried Chicken, which is said to have been invented by one of two Korean restaurant chains (Pelicana Chicken and Mexican Chicken), has expanded from its Seoul origins to achieve international recognition. And it's no wonder why: Doused in a salty-sweet chile sauce, KFC's secret weapon is in the fact that it's double-fried, so that it's just as good, but twice as addictive.

When we first featured ravenouscouple's recipe for Korean Fried Chicken nearly six years ago, we knew we were onto something huge—and in the last several years, as more and more KFC restaurants (no, not that KFC) have opened in New York, our early suspicions were confirmed: This is the good stuff.

Here's how Amanda and Merrill described it when they first tested it in 2010:

Honeyed and fragrant with a fiery kick, ravenouscouple's chicken wings encapsulate the word "addictive." The ingenious combination of coating the wings in Wondra and then double-frying them renders the fat and then crisps the skin to the point that it essentially becomes a shell encasing the succulent meat. We're pleasantly reminded of the best version of General Tso's chicken we've ever had—only better. Fry up a mess of these for your friends, and they'll love you forever.

Just make sure to have a tall beer and a bowl of pickled radish (daikon) nearby to cut the heat and the grease. 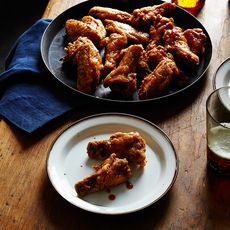 For the chicken and batter:

For the spicy ginger-soy glaze:

This article was written by Leslie Stephens from Food52 and was legally licensed through the NewsCred publisher network. Please direct all licensing questions to legal@newscred.com.

Set up your Flavor Profile

Find just-for-you recipes, tasty tips, flavor inspiration and all things delicious when you sign up for Flavor Profile.