Call Them Apple Brownies or Apple Blondies or Neither; They're Awesome

Call Them Apple Brownies or Apple Blondies or Neither; They're Awesome

One of the best things about fall is how the humblest of foods—apples, squash, soup—are elevated to seasonal celebrity status. Apples just might be my favorite of the bunch. For roughly nine months out of the year, they are largely relegated to being a portable, rather uninspired mid-afternoon snack. It’s usually only when the fall pilgrimages to countryside orchards begin that the lowly apple is finally showcased in our dishes. Pies, crisps, butters, and sauces top the list, but it’s a retro recipe for Apple Brownies that inspired me to make good use of the Ginger Golds that I had picked up at a roadside farm stand near my New Jersey home.

My mother, while a very good cook, didn’t bake regularly when I was a kid. Rather, she had a couple seasonal specialties—butter cookies around the holidays, apple brownies in the fall—both of which were hotly anticipated each year. Apple brownies, as I remember them, don’t resemble traditional brownies in much other than in shape and name. They don’t contain any chocolate, and can be best described as an autumnal spiced cake/blondie hybrid with a very generous amount of diced apple throughout. I remember absolutely devouring them as a child, savoring the chunks of tart fruit in the moist, cinnamon-y cake with a slightly crisp top. It was a very good day at school if there were enough leftover to make it into my lunchbox. 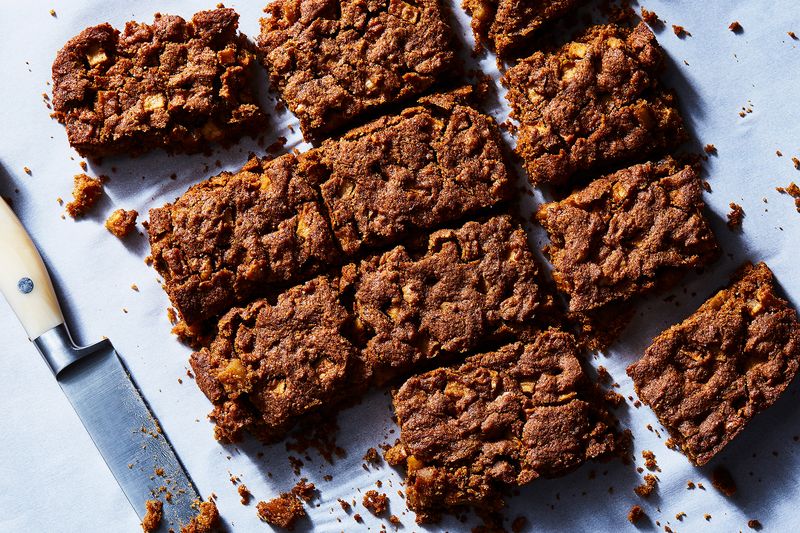 This retro treat is vegan-ized and coconutty. Photo by Julia Gartland

The recipe I grew up with contained a lot of butter (2 sticks, to be exact), white flour, and white sugar. Of course they were delicious, but it was the pre-kale salad 80’s back then. When I made this recipe a few weeks back, I knew I wanted to veganize it, ditching butter and sugar for coconut oil and coconut sugar. I played around with the spices a bit, adding nutmeg and increasing the amount of cinnamon. The original recipe called for Granny Smith apples, long praised as a superior baking variety. I used Ginger Golds, but any apple with a firm, crisp flesh (that will hold up to cooking) will fit the bill, such as Jonagold, Golden Delicious, and Braeburn.

The result was something still unbelievably tender with a good crumb—as difficult to resist as ever. It hit all the right notes, nostalgic and otherwise. 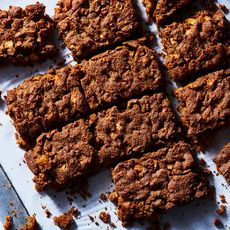 This article was written by Lauren Kretzer from Food52 and was legally licensed through the NewsCred publisher network. Please direct all licensing questions to legal@newscred.com.

Reach for McCormick® Cinnamon when you whip up the batch of Vegan Apple Brownies featured in this article. A vegan-ized version of the classic blondie or brownie, they're just as sweet-tooth-satisfying as the non-vegan kind.

Reach for McCormick® Cinnamon when you whip up the batch of Vegan Apple Brownies featured in this article. A vegan-ized version of the classic blondie or brownie, they're just as sweet-tooth-satisfying as the non-vegan kind.