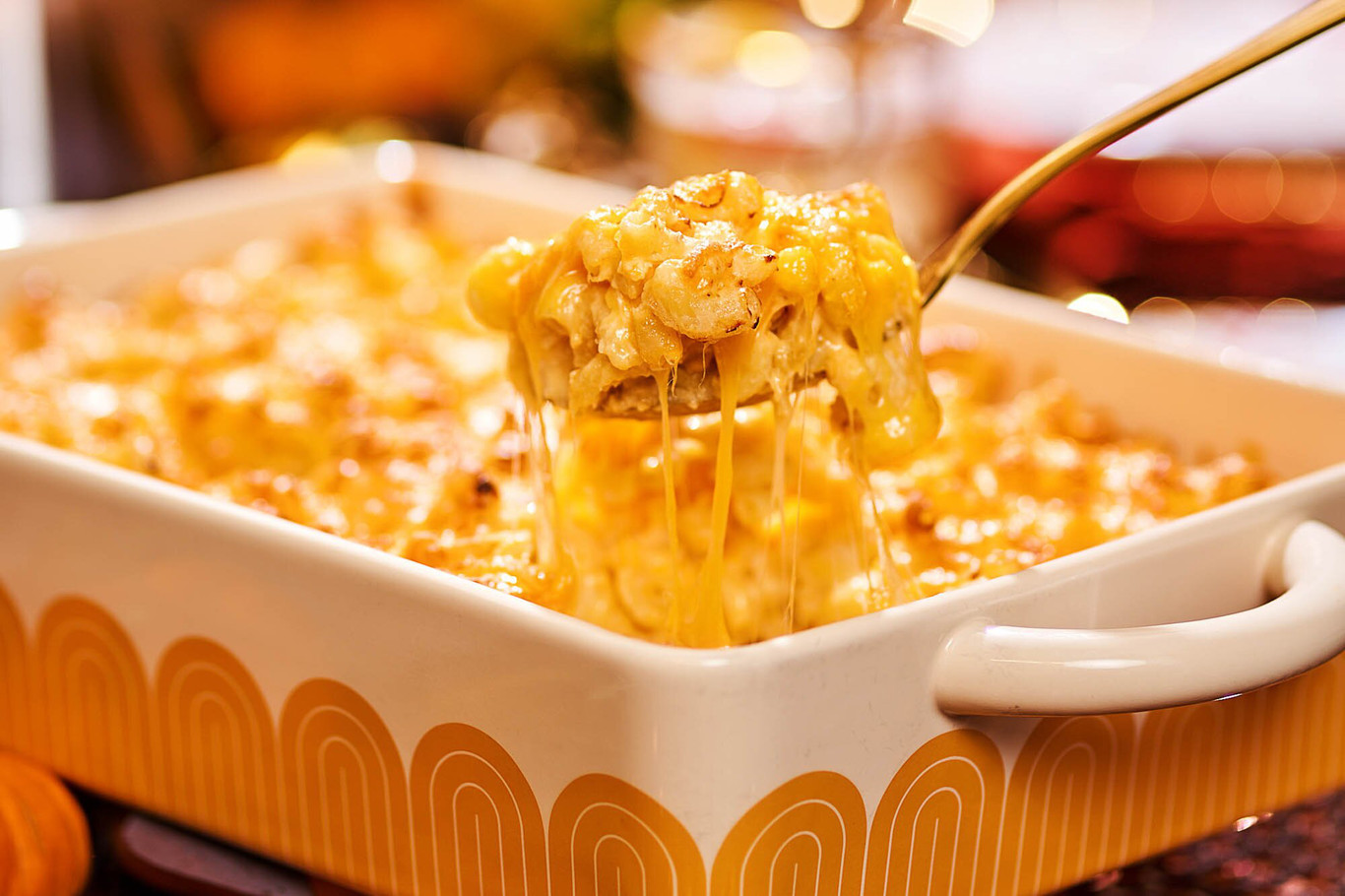 Southern baked macaroni and cheese is the ultimate comfort food. Synonymous with soul food, it's part of Black America's culinary story. Creamy, rich, ooey-gooey, super cheesy, with those crispy browned cheese edges—no one can resist perfectly baked mac and cheese. Exceptional mac 'n' cheese makes noises after it leaves the oven, as if the ancestors are speaking to us through the squeaks and crackles of cooking.

This dish is far more than a simple side. In Black American households, for the most part, being the designated maker of macaroni and cheese is the pinnacle—the highest culinary accolade. There are rules of engagement and distinct hierarchy when it comes to this dish. Who makes it, how it's made, and who's allowed to bring it to a gathering involves negotiation, tradition, and an understanding. Not just anybody is allowed to make the mac 'n' cheese. If you're invited to someone's house, especially for a holiday, you can't just show up toting that casserole pan. You have to be assigned. You have to be appointed. You have to be anointed. When somebody can make the mac 'n' cheese, you can't replace them or bring your own version. These truths may bring about discord in some households, but one fact remains: Macaroni and cheese is the most significant dish on the table.

I've been in charge of Thanksgiving dinner for my family since the age of 14. I took over macaroni and cheese duties after being appointed by my grandmother at our annual family reunion earlier in the summer. Watching my grandmother grate dozens of pounds of cheddar, crack dozens of eggs (as well as jokes about receiving a facial from the boiling pasta steam) more than prepared me to take the leap from observant to participant. and make the same meal year in and year out. That menu includes ham, lamb, potato salad, green beans, cranberry sauce, sweet potatoes, and cranberry sauce from the can. (If it doesn't have ridges, I don't want it.)

Macaroni and cheese is more important than the turkey. It's an African American proverb, you know.

Forget the rudimentary stuff sold in a box or a microwavable packet. Real mac and cheese is always made from scratch and usually involves multiple kinds of cheese, secret touches (eggs, bay leaves or evaporated milk may be involved), and debates over toppings. It's always baked. It's always a side dish, but it's the side dish of honor, present at every important occasion. In Black families, you associate macaroni and cheese with collard greens, black-eyed peas, fried chicken, and potato salad—all celebration foods. If there's a cookout, somebody is making mac 'n' cheese. For Easter, there's the resurrection of Jesus served alongside mac 'n' cheese. Baptisms, funerals, baby showers and graduations are not complete without it. And at Thanksgiving—the ultimate marathon of culinary expression and appreciation—macaroni and cheese is more important than the turkey. It's an African American proverb, you know.

Apple pie gets put atop the pedestal of American cuisine, but it's really macaroni and cheese that should hold that lofty perch. It's omnipresent on the kids menu at restaurants and people are always trying to improve on it with luxe additions like truffles, bacon or lobster for "grown up" mac 'n' cheese but little do they know, it's already older than your grandmother's grandmother. History tells us that Thomas Jefferson smuggled molds for making tubular pasta from Italy, and recipes for a cheese-based "macaroni pudding" have been found in cookbooks from the early 1800s. Jefferson was not in the kitchen cooking anything, so the task was put to his cook, the enslaved, culinary-trained James Hemings. And we must pay him homage.

On a scale of "Black family reunion-approved" to "office holiday potluck," here are some guidelines for making the best mac 'n' cheese:

Everyone has their own family classic recipes and this Southern-Style mac 'n' cheese is Nikki Miller's favorite and will always have a place on her family's table.

Macaroni is the standard pasta of choice but gemelli or cavatappi are acceptable substitutes when in a pinch—or you're trying to stunt on your cousins.

Velveeta and canned evaporated milk make the mixture too sweet, but they are acceptable for textural structure.

A blend of  semi-soft and hard cheeses gives the pasta a duality of sharp flavors with a mellow finish.

Mustard powder ties together the flavor of each cheese.

Bay leaves, or any herbal aromatic, really, give just a hint of a savory undertone so no one mistakes it for dessert.

As for toppings, the cheese is enough.

Whole eggs help firm up the casserole without the addition of a roux and its extra flour.

Breadcrumbs and pretzel toppings can render the dish too dry and absorb all of the moisture from everything underneath.

As far as additions of vegetables, or meat, the short answer is no. But you can do what you want in your own home. Just don't bring it into mine.

This article was written by Nikki Miller-Ka from Food & Wine and was legally licensed through the Industry Dive Content Marketplace. Please direct all licensing questions to legal@industrydive.com.