Chef Katie Button gets why you might be wary of dried mushrooms. “There’s a little bit of a perception that fresh is always better,” she says. “But it's not. You get different flavors from certain dried and canned things.”

On the menu at her Asheville, NC restaurant, Cúrate, Button has a mushroom dish that customers swoon over for its intense flavor—it's unlike anything they’ve had before, some say. “There’s a reason for that,” she says. The dish is finished with an incredibly labor-intensive mushroom stock that reduces for hours.

But Button knows as well as anyone that a stock like this isn't something most people are going to make at home, so, when writing recipes for her Cúrate cookbook, she looked for a way to get the same result in an easy way readers might actually follow. That’s when she came upon her dried mushroom trick: She microwaved dried mushrooms in water, let them steep, and “it actually turned out better than our dish at the restaurant,” she says.

She claims the rich, earthy, umami flavor is exponentially more concentrated through the dehydration of dried mushrooms. “They're reduced down to their perfect mushroom essence, so you get that back out in a really big way,” she says. Add only a few to a dish, and you ease in a bit more depth. But added by the handful? You “pack a big umami punch.” Dried mushrooms bring big earthy flavor to vegan dishes, too, making them a fast-flavoring ingredient you’ll want to have on hand, all the time.

Beyond the flavor, they're a solid choice for anyone who's ever watched fresh mushrooms turn in the fridge and go to waste.

“I don't know about you but, the number of times I’ve bought a pack of fresh mushrooms, sat them in my fridge, and then they're covered in fungus because I just never got around to using them?!” Button says. “I love how dried mushrooms reduce waste.”

Dried mushrooms last indefinitely if stored in an airtight container in a cool, dark place. How can you tell if they’re bad? “If you smell them and they just don't smell like anything,” she says. “They're never going to ‘poison.’ They're never going to spoil. They're just going to lose their flavor over time.” If they’ve faded, add more to your application.

What to Look for

“You're kind of stuck with whatever brand the store is buying,” Button says of sourcing dried mushrooms. Over brand loyalty, look for mushroom varietal. She loves porcinis, chanterelles, morels, and Black Trumpets for their dark, rich flavors. Buy one or several, or look for mixes featuring at least one if possible. “It's about how strong that mushroom flavor you're going to get out is,” she says of whichever you find. “The blend may be a bit lighter, but it’s still going to be great.” 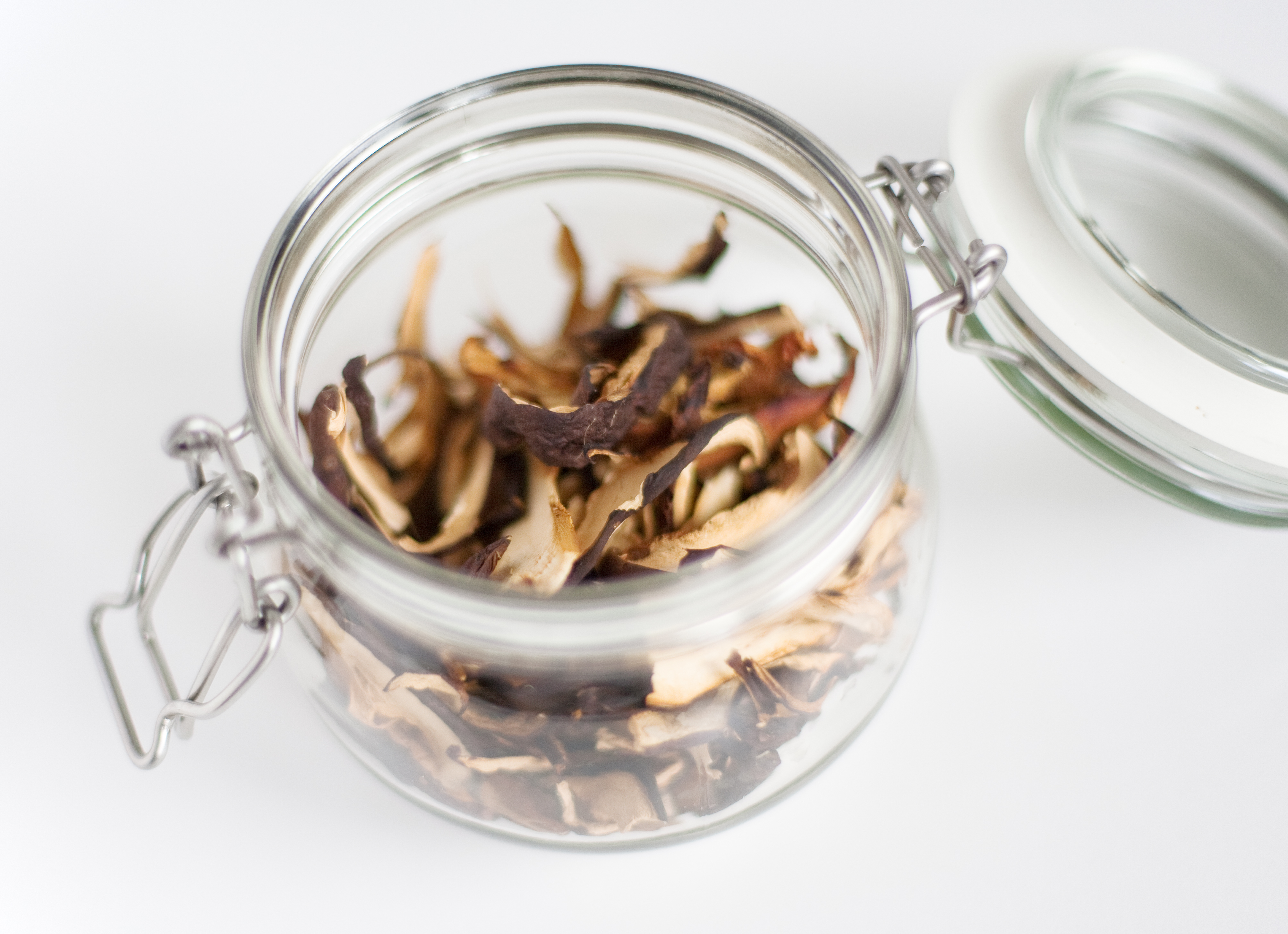 How to Use Them in Almost Anything

First, just because they're dried, doesn't mean you shouldn't wash them. “They grow in the dirt,” Button reminds. As with fresh mushrooms, first taste your dried mushrooms. If gritty, wash the amount you’ll use. Then trim the stems, which are often chewy, if you’re going to use them after reconstituting.

Her favorite application is to make a “super flexible” stock with the whole bag and freeze individual portions. She suggests a ratio of about an eyeballed tablespoon of dried mushrooms per cup of water for a stock you could use in soup, rice, couscous, or other grain dishes.

To create Curate’s beloved side dish, sauté mushrooms, add a touch of the mushroom stock, reduce until dry, then add a splash of wine. “I love Sherry and mushrooms together, because they're a match made in heaven,” Buttons says. “But white wine works, too.”

For an even easier soup or braise, throw a few dried mushrooms in your seasoning sachet, or add and remove a few mushrooms as you would a bay leaf.

Where should you beware? “This could easily overwhelm fish,” Button says. Think vegetable and meat dishes that can take a lot of earthy flavor, and avoid those where mushrooms clash with other elements, like a citrusy sauce.

For a super-earthy, umami glaze, up the mushrooms exponentially, using an entire ounce in weight per cup. Bring to a quick boil in the microwave and let steep for 10 minutes. Strain and use. “Those amounts add a lot of flavor to any dish you're cooking for four or six people,” she says.

But they're not just good for seasoning liquid—stock, braising liquid or sauces. Button also chops up the reconstituted mushrooms to add flavor to everything from tomato sauce, risotto, or scrambled eggs.

“They still have mushroom flavor—you haven't taken all of it out,” she says.

Or blend them into a compounded butter that makes everything that much better, whether you cook with it, drizzle it onto steamed vegetables, or baste a piece of meat with it. “You have fat, creaminess, saltiness, then that earthy umami flavor from the mushrooms,” Button says. “You have this feeling of, ‘Why is that so good? Why does it taste deeper and richer and more delicious?’ It's because of the mushroom butter!”

Give dried mushrooms the credit they deserve in this hearty recipe for creamy risotto: Red Wine Risotto with Porcini Mushrooms.

Give dried mushrooms the credit they deserve in this hearty recipe for creamy risotto: Red Wine Risotto with Porcini Mushrooms.