Deviled Eggs: How To Make Them And 5 Mistakes To Avoid

Deviled Eggs: How To Make Them And 5 Mistakes To Avoid

Egg sales are soaring, with shoppers including the versatile staple on their grocery lists as they shelter in place during the pandemic. So, once you’ve tried out all your usual omelet and quiche recipes, don’t forget to take a crack at deviled eggs ― which are also a great option for Easter.

Making deviled eggs involves hard-boiling and peeling eggs, slicing them and scooping out the yolks to mix with mayonnaise or other ingredients, and then refilling.

But a lot can go wrong in a process with so many steps. The eggs may be overcooked or undercooked. Sometimes, hard-boiled eggs are impossible to peel, and fillings can turn out lumpy or gloopy with too much mayonnaise.

“I think they are challenging for people because you have to get the perfectly cooked egg, as well as needing to make sure that the filling is the right consistency,” said Claudia Sidoti, principal chef at HelloFresh. “Although you don’t need a lot of ingredients in your deviled eggs, it’s all about ratios.”

Too many home cooks overthink it, said Tomas Bohm, chef and owner of The Pantry in Little Rock, Arkansas.

“It should be simple,” said Bohm, who serves truffled deviled eggs at his restaurant. “I think people try really hard, and the outcome is not always good.”

We asked chefs to weigh in on five of the most common problems with making deviled eggs and how you can avoid them.

1. The eggs are overcooked

“The egg yolk is so done, and it has that grayish, greenish outer layer,” he said. 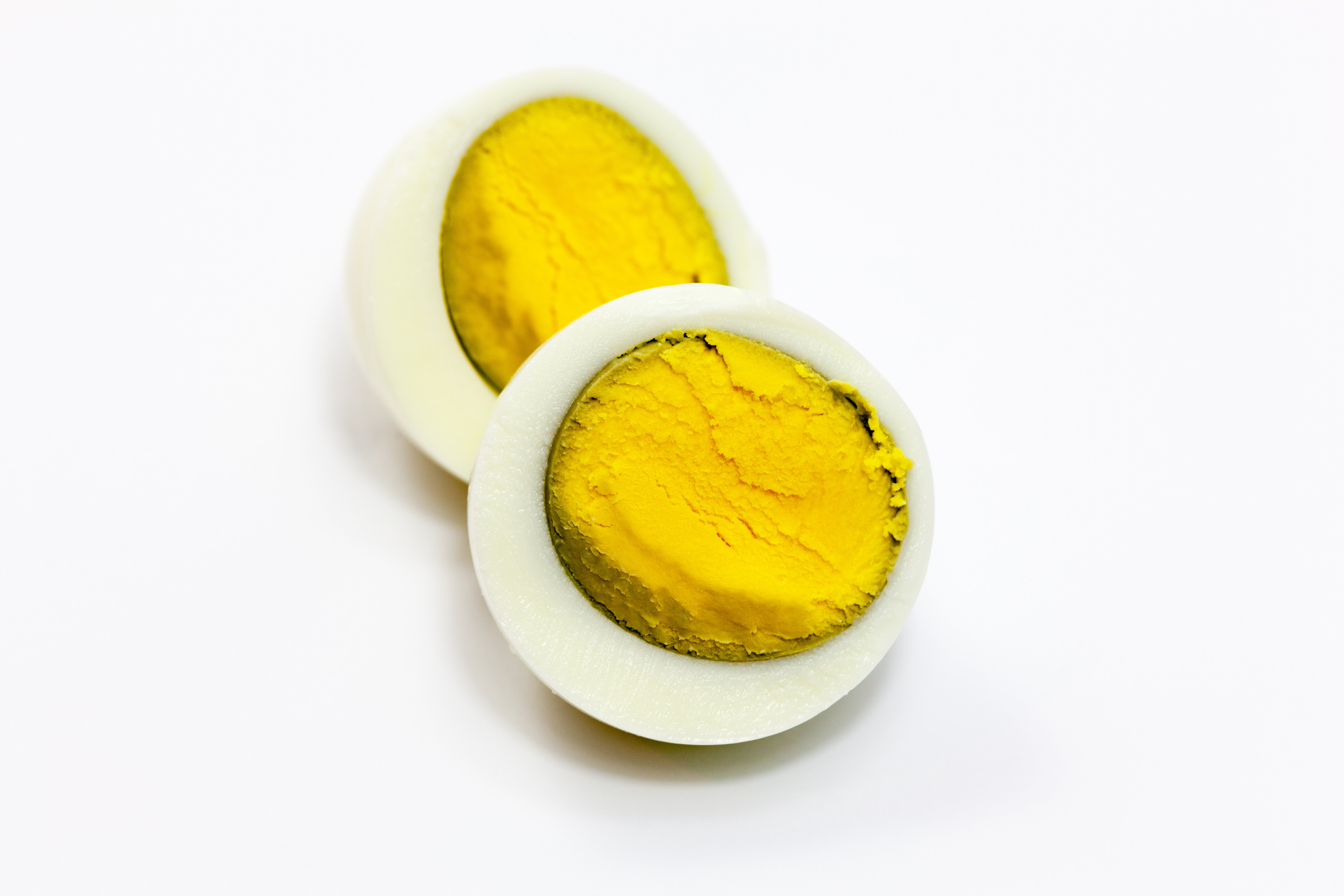 A hard-boiled egg with a dark ring around the yolk due to overcooking. eag1e via Getty Images

So, what’s the best way hard boil an egg? Frank Proto, director of culinary operations at theInstitute of Culinary Education, has his own preferred method.

For example, Proto puts the eggs in a pot, covers them with water, brings it to a boil, lets it boil for one to two minutes, and then turns off the heat and lets the eggs sit in the hot water for 10 to 12 minutes. Then he drains the water and runs cold water over the eggs until they cool.

“That usually does a pretty good hard-boiled egg for me,” he said.

“That way, the egg yolk is cooked, but it’s still a little bit creamy,” he said.

If you’ve ever hard-boiled eggs and found them near impossible to peel, with pieces of egg white coming off with the shell, you’re not alone. Professional chefs have this problem, too.

“The bane of my existence,” Proto said. “Three Easters ago, I said I’d bring deviled eggs to a gathering, and even though I’ve been a professional chef for 24 years, I went through like four dozen, five dozen eggs, and they wouldn’t peel.”

Fresh eggs tend to be harder to peel, Sidoti said. “Try to plan ahead and buy your eggs a few days or up to a week in advance.”

“I peel them underwater,” he said. “Once water gets under the membrane, the shells come off easily, and they’ll look really nice. This is what I found works eight times out of 10.”

Also, peel hard-boiled eggs before refrigerating, Bohm said, or they’ll be much harder to peel.

There’s no shame in serving misshapen deviled eggs, though. If aesthetics matter, you can use the hard-to-peel ones in other recipes, like egg salad or potato salad.

How you choose to slice deviled eggs is a personal preference, but there are a few tricks if you want them to stand upright.

“One thing I also like to do is cut a little foot on them,” Proto said. “You can cut a little flat spot on either side, so they sit flat. I think that that’s something that most people don’t do.”

Cutting the eggs through the middle is Bohm’s preference for the deviled eggs he serves at his restaurant. He also trims the tips of the two halves so they don’t topple over.

“One side is deeper; one side is shallower, because the egg yolk never sits perfectly in the middle,” he said. “But it doesn’t matter. You can’t really tell when it’s filled and portioned.”

4. The filling is bland and too lumpy

Underseasoning the yolk mixture is another common mistake, Proto said.

“Yolks and whites are pretty bland,” he said. “You should have a nice amount of seasoning in your yolk mixture.”

But keep it simple. Mayonnaise, mustard, salt, pepper and maybe a bit of lemon juice or vinegar is all you need, Sidoti said.

“Deviled eggs are a classic appetizer, but also a perfect base for other fun flavors,” she said. “Try dressing them up with other ingredients like truffle zest for something fancy, chives or other tender chopped herbs, hot sauce, Sriracha, crispy fried onions, chopped bacon and even caviar.”

Just make sure the filling is as smooth as possible. Bohm recommends mixing everything in a food processor or blender, and adding some of the hard-boiled egg whites will help keep the mixture smooth.

5. The deviled eggs are dried out

To keep deviled eggs flavorful and fresh, don’t assemble them until just before serving.

Don't let your deviled eggs sit out too long before you plan to serve them. bhofack2 via Getty Images

Store the yolk mixture in a zipper-seal bag and the hollowed-out whites on a tray in the refrigerator until the eggs are ready to fill.

Assemble by snipping off a corner of the baggie and piping the yolk mixture into the egg white halves. Or, just use a spoon.

“I would definitely wait until the last minute,” Bohm said. The longer the deviled eggs sit, the more likely they will lose flavor and dry out.

Plus, Proto said, “They almost always get that weird crust on top, and I hate that crust. So, I try and fill them as close to serving as possible.”

This article was written by Erica Sweeney from Huffington Post and was legally licensed through the NewsCred publisher network. Please direct all licensing questions to legal@newscred.com.