It doesn’t get much more French than Sole Dugléré.

The elegant dinner party dish was invented by a model of a nineteenth-century Parisian chef named Adolphe Dugléré. According to Larousse Gastronomique, he studied under Carême, ran the kitchens for the Rothschild family, and, at his Paris restaurant Cafe Anglais, also invented pommes Anna, scalloped potatoes par excellence.

His eponymous fish dish, as all the best French ones do, starts with a very boring list of ingredients: sole fillets, flour, butter, fish stock, white wine, some token spices in drearily small quantities. But classic French cooking is all about layering in flavor, combining those pantry staples into ever more elaborate components until, almost by magic, the result yields something far more delicious than its parts.

It’s no wonder when Paula Wolfert took a bite in her French cooking class in 1958, she decided to drop out of college to become a chef—and spent the rest of her life in pursuit of similar nuanced dishes, a hunt that led to the creation of nine seminal books on the foods of the Mediterranean that changed the way Americans eat.

Wolfert might be the most influential cookbook author you’ve never heard of, but to food insiders, she’s notorious for writing recipes of almost impossible complexity and authenticity. They’re often so layered, at first it seems like they’re not going to work. Sole Dugléré fits that pattern.

Things start normally enough: The fish is sprinkled with salt, pepper, and a smidge of cayenne. Then things take a soigné turn, as each fillet is wrapped around a single pat of butter, one peppercorn, and half a bay leaf, then topping each with a single strand of onion, before poaching them in white wine. The modern cook might regard those scant flavorings with a mixture of embarrassment and concern and think, God, this is going to be bland.

Next—as any Francophile can guess—comes a rich sauce, of fish stock, cream, and fresh tomato pulp, thickened with flour and butter, or a roux. It’s thick and pasty, old-fashioned and deeply unpromising. It goes onto the fillets. After a light sprinkling of Parmesan, the dish goes under the broiler. 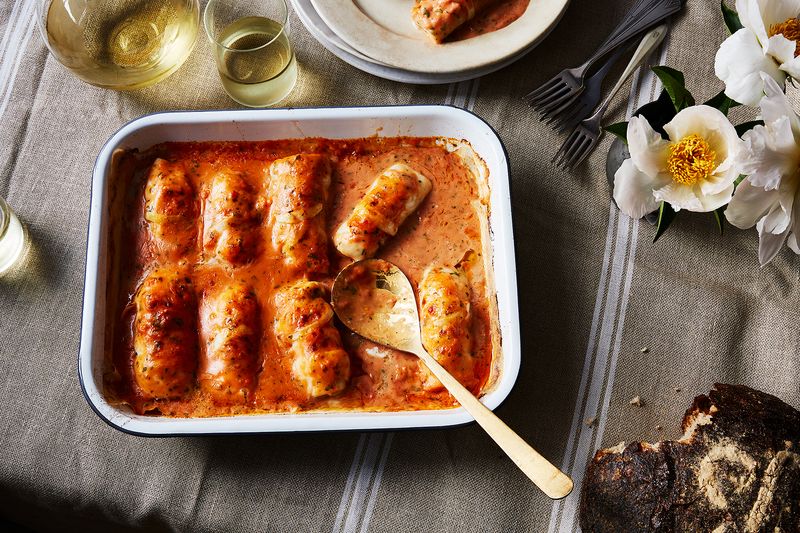 Finally the magic happens. In the heat, the sauce doesn’t just brown, it melts—it slips down between the fillets and blends with the residual acid and moisture of the white wine poaching liquid, which balances the richness and turns it velvety smooth. As the sauce simmers with the sole, it soaks up the subtle flavors of those onion strands, bay leaves, peppercorns, and cayenne, and takes on an almost unbelievable intensity of flavor. The swirled sole fillets become the counterbalance for the potent sauce.

When Wolfert tasted the dish, she was a 20-year-old student of Dione Lucas, the preeminent French cooking authority of the time. A precursor to Julia Child, through her own television show, cookbooks, and even restaurants, Lucas attempted to counteract Americans’ 1950s craze for processed foods by teaching them French classics. Lacking Child’s charm, she was not as successful. But she gave Wolfert a profound immersion in French technique. Schooled in Lucas’ perfectionism as well as methods, in the decades to come, Wolfert would go on to change American culinary history with her quest for layered, delicious foods around the Mediterranean. 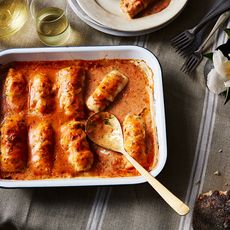 This article was written by Emily Kaiser Thelin from Food52 and was legally licensed through the NewsCred publisher network. Please direct all licensing questions to legal@newscred.com.