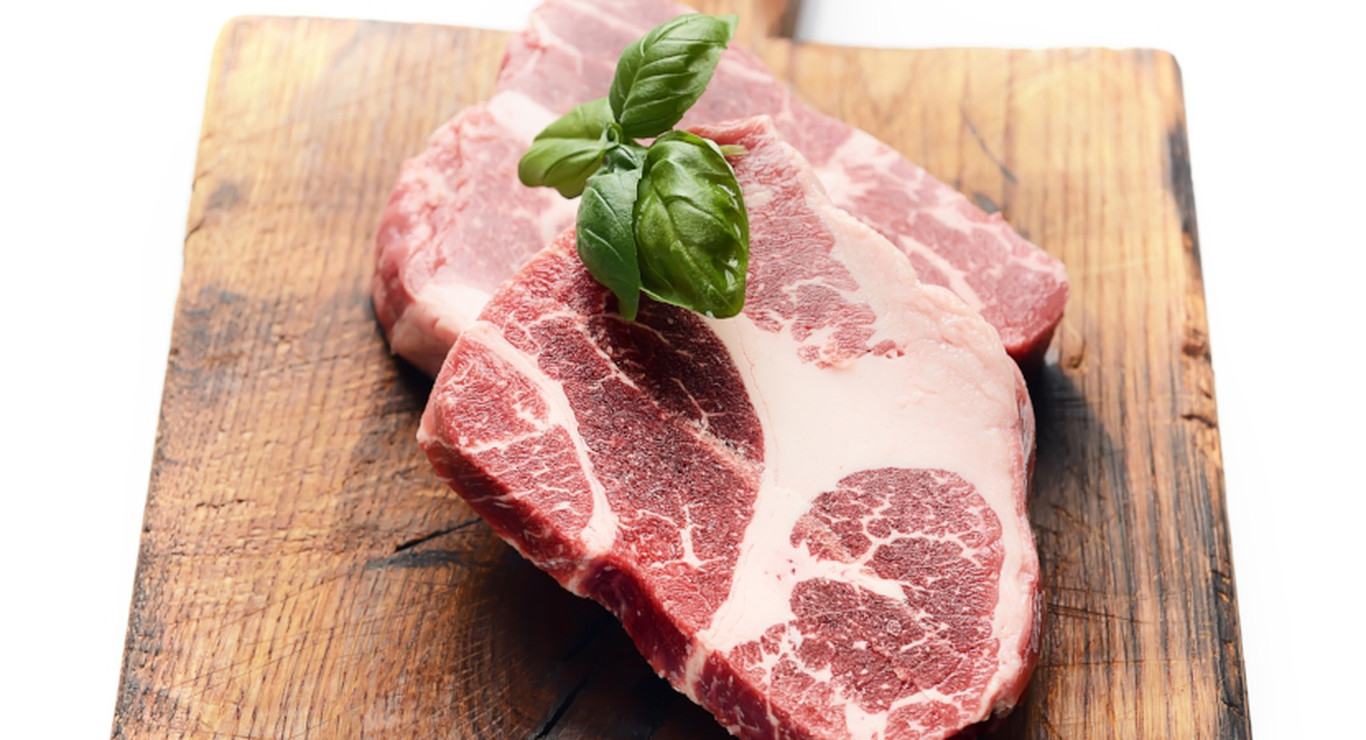 Next time you head to the butcher shop, pass on your go-to cuts and try something new. With the recommendations below, you can order like a pro. - McCormick Test Kitchens

A butcher's case of beef is made up of more than just a few recognizable cuts, so we teamed up with the Beef Checkoff to chart every section, identify cuts, and share how to use them in everyday cooking.

What's the first cut of beef that you usually go for on a visit to the butcher? Is it Skirt or Flank Steak, to put on the grill and have dinner in minutes, or is it a big, swaggering, wow-factor T-bone? A roast you've made more times than you care to admit, or a staple burger blend?

On average, there is little meat that a butcher can't use once they've received a side of beef for breaking down. That yields a lot of cuts—some popular ones that are picked off quickly, and some that might easily be passed over in a case if you aren't familiar with them—the Tri-Tips, Blade Steaks, and the even more obscure, like Denver or Bavette cuts. When I'm standing in front of a gleaming, chilly counter, I want to get in and out with the thing I know how to cook best. I think that's normal—but if you're willing to learn, you'll be rewarded with insider knowledge, a better eye for the right cut for the recipe you're making, and—maybe, if you're there on the regular—the butcher's favor.

There are many ways to cut it—a cut chart, that is—and this is the way we're breaking it down for you. Illustration by Adriana Gallo

You probably know the ubiquitous cut chart that's at every counter—like the one above! Every chart that illustrates cuts is different, just as butchers approach their craft differently. And I'm breaking things down into the nine sections shown, clockwise from the Round, with recommendations and helpful little tidbits you can tuck away for next time you're looking to cook with beef.

The Round section comes from, unsurprisingly from its name, the rump and the hind legs. It's where you'll find a wealth of roast-type cuts (though you can cook them lots of different ways). This and the Chuck, which we'll get to later, are full of hardworking muscles, and have many lean and tough cuts; as a result, several of them are ground instead of used as is. But there are a few cuts that are worth asking for specifically:

Top Round is a king of roasts, but also takes well to tartare and jerky preparations. Cuts like Bottom Round and Eye of Round also take well to roasting slowly and slicing thinly for sandwiches or just to serve with something creamy. Sirloin Tip can be cubed up and tossed in soup.

Other cuts you might ask for are Oyster Steak (a great tiny steak for quick grilling) and Hind Shank (bring on the braise), but your butcher may not stock them regularly. A note on availability: Often butcher counters don't stock an unlimited amount of cuts at any one time. The Meat Hook's General Manager, Mike White, says they only get so much meat in a week, which means that when they're out of a cut, they're out! So, if you're looking for an interesting or less common cut, it's a good idea to call ahead. 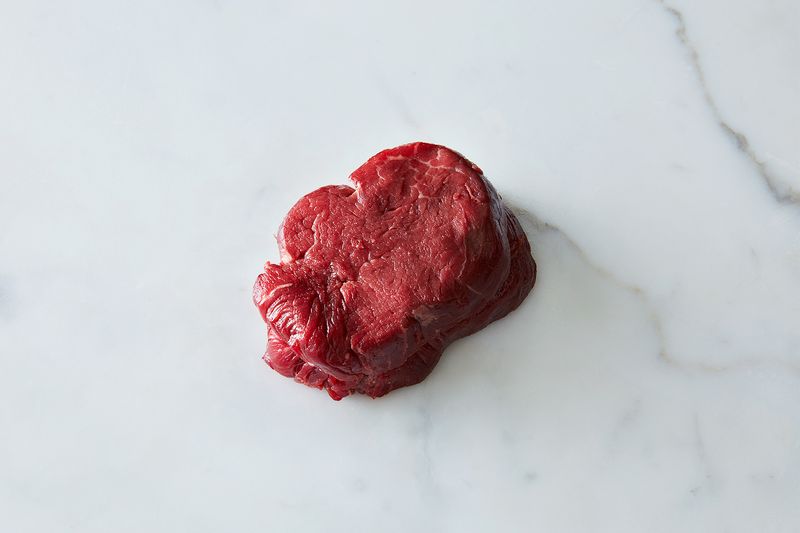 The Sirloin section of beef is sandwiched between the top part of the Round and the Short Loin. It's one of the most well-known parts, and the meat from this section of beef lands right in the middle of the tender-to-tough spectrum. Sirloin itself works like a charm in recipes like Steak for a Brooklyn Backyard Barbeque and Nigel Slater's Miso Soup with Beef and Kale. You can pan-fry, grill, or broil Top Sirloin, and lesser-known cuts you should be trying out can be found here, too: Have you ever heard of Coulotte, or French-cut Steak? Season it liberally with salt and freshly ground black pepper, sear in butter and vegetable oil until medium-rare, let rest, and serve with Braised Onion Sauce. Or Sirloin Flap, otherwise called Bavette? It works like a dream when marinated; try it in this Steak and Bean Torta. Our California contingent swears by Tri-Tip; our Creative Director Kristen Miglore even served it at her wedding.

The Short Loin is where you'll find all the sought-after—and generally most expensive—cuts: Your Porterhouses and T-bones (grill either up for a Sunday dinner and serve with French butter), Tenderloins (salt crust one, crust one with herbs, or serve one with mushroom sauce), and New York Strip steaks (broiled to perfection) live here.

(Flank Steak is often considered part of this section, but we gave it its own category.) 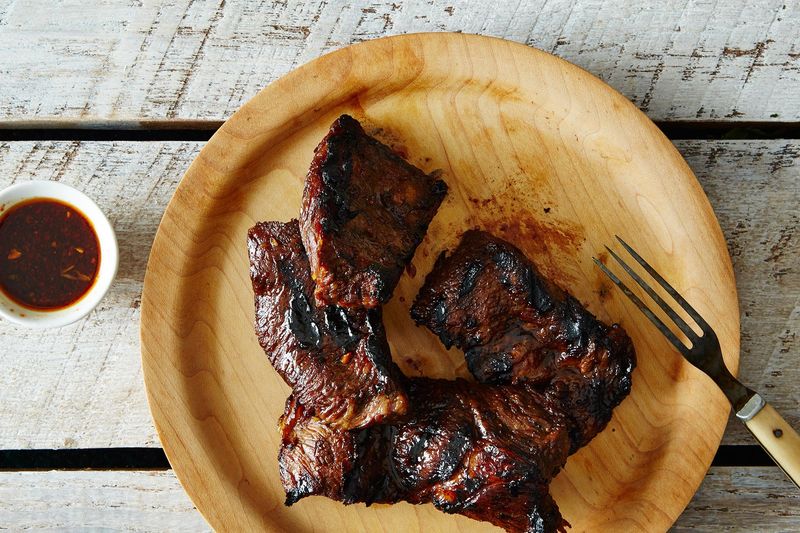 Cuts from the Rib section of a cow are some of the easiest to identify in a case, with those pearly rib bones peeking out from behind rows of fatty slabs. Back Ribs are a top choice for grilling out: Marinate them and then pop them on the grill, or bake them and finish them over coals. From the Rib portion, you'll pull cuts like the Rib Eye and Prime Rib—ones that you can cook in a roast or as steaks, portioned out. Try Steak with Mustard Butter, Cowboy Rubbed Rib Eye with Chocolate Stout Pan Sauce, Lynne Curry's Prime Rib with Mustard and Herb Butter, and Roasted Prime Rib with Sauteed Mushrooms and Mom's Creamy Horseradish Sauce.

(Skirt Steak is sometimes grouped in the rib section of a cow, but for our diagram, we're categorizing in the plate section.) 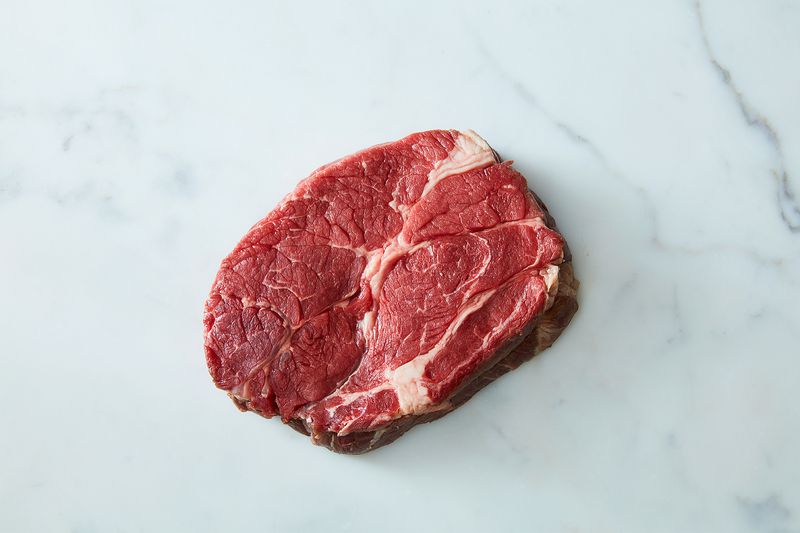 The Chuck section of beef is right under the head, encompassing the shoulder and pretty much the entire front portion of the animal other than the neck and Brisket—and it produces several steaks. "The Shoulder is by far the heaviest part of the primal we bring in," Mike explains, referring to the four main sections they receive at The Meat Hook. He adds that, yes, this is why this section has more cuts than others, but there's also the fact that the shoulder is a hard-working muscle—think about if you bent down to nibble on grass all day—and that's why it tends to be so well-developed. Chuck Roast or Steak and Chuck Eye take well to long cooks and soups and stews, like in Yakamein (New Orleans Noodle Soup).

Short Ribs are a Food52 favorite and are best braised. Try them tinged with tamarind, as a ragu, with beer and buckwheat honey, as a chili, in a savory cobbler, or in tacos.

Flat Iron Steak is tender, second only to the Tenderloin and half its cost. Be careful of its membrane, though, which can be tough unless removed (your butcher should do this for you). You might also find Flat Iron referred to as Top Blade Steak, which is what you'd call it before the membrane has been removed. Try it in this steak sandwich with a garlicky aioli. Denver Steak is the new kid on the block that everyone wants to meet—it's happy to take just a little salt and be grilled up. 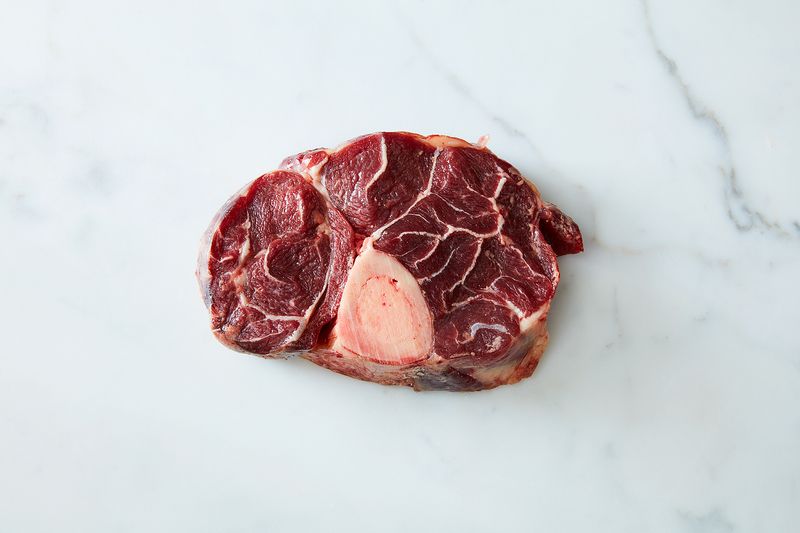 Some butchers refer to Brisket and Fore shank as part of the Chuck section, but we're breaking them out here since they're considered lesser cuts and because they sing with similar styles of cooking. Brisket takes to many preparations as long as it's getting softened up—think smoking, stewing, barbecuing, roasting. Fore shank, from the leg, is another slow cooker. Give it overnight or a full workday to break down, and it will fall into a ragu (substitute short ribs in this recipe for Shanks and adjust the cook time as necessary until tender) very nicely. You could also try it, ground, in a chili like this one, which has a little bit of cocoa powder and coffee. 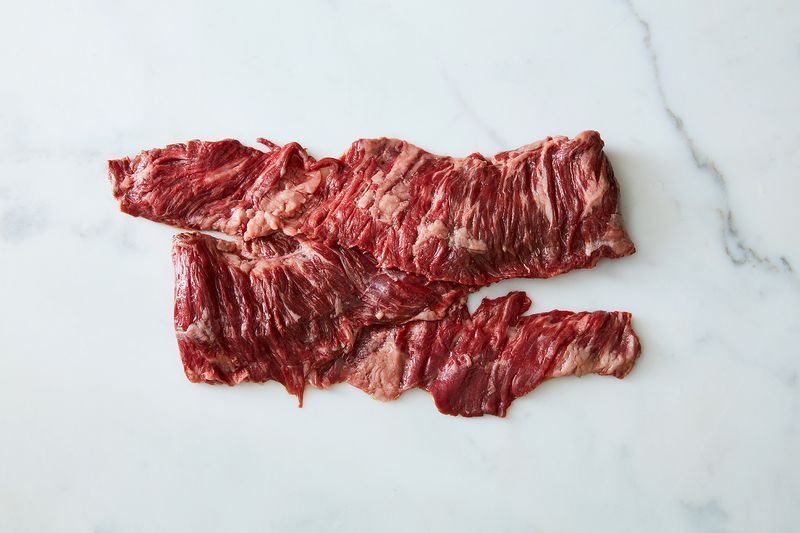 Two lean cuts, Skirt Steak and Flank Steak, are weeknight go-tos; they love a marinade and are quick to sear over a grill or in a grill pan. Skirt is at the very bottom of the ribs so is often considered part of the rib section; Flank is very low on the bottom of the cow next to the back legs, and can be grouped in with cuts from the middle of the cow like Sirloin and Short Loin. Try them in a Bloody Mary Steak Salad, as Vietnamese Sugar Steak, grilled and served with Greek salsa, with chimichurri, as a sandwich on Texas Toast or with herbed feta, with bourbon, or with green sauce. Hanger Steak has its place here, too; it's sometimes referred to as one of the best steaks out of all the cuts.

All of this said, different butchers in different cultures or places cut beef in a variety of ways—but this gives you a foundation on asking for the basics (plus a few weird, wild options) and feeling confident knowing what you'll get. And when you're ready to go even deeper, to try a new steak you've heard of, delve into offal or bone marrow, or grind your own hamburgers, just ask your butcher for a recommendation—treat him or her like your own personal Virgil, even if just for grilling season.

This article was written by Samantha Weiss Hills from Food52 and was legally licensed through the NewsCred publisher network.