Your Next Brunch Should Include These Za’atar Baked Eggs

Your Next Brunch Should Include These Za’atar Baked Eggs

In her most recent F&W Cooks video, Gail Simmons reminisces about her first-ever job in a professional kitchen. She was 18 years old, doing breakfast duty on a kibbutz in Israel, and had the monumental task of cooking eggs for 600—600!—people at a time. Looking back, she says it not only taught her about making eggs, but also helped her learn the spices and flavors in the region. Her za’atar baked eggs recipe is the perfect marriage of those two skills—a bright, flavorful dish with plenty of spices and creaminess from egg yolks and yogurt. It’s ready in 30 minutes and ideal for a quick weekend brunch. Check out her main tips for making the recipe below.

While the oven preheats, Simmons heats up olive oil and onions in a skillet, adding salt once the onions start to sizzle in order to bring out the sugar in them. Once they’re soft and translucent, she adds the cherry tomatoes, and after that, the red peppers. The cherry tomatoes will burst in the pan, creating a liquid for the sauce.

…and don’t reduce it too much

Once you’ve added the peppers to the tomato sauce and it reduces a little bit, Simmons says to take it off the heat—you don’t want to lose too much of the liquid. Then, she adds chopped parsley, za’atar, and salt.

Crack the eggs in a dish separately

To nestle the eggs into the sauce, Simmons recommends cracking them in a smaller bowl first, so you can cleanly transfer them to the skillet. She then uses a little tablespoon to make a well for each egg in the sauce.

The eggs need to cook in the oven for about 10 minutes at 375 degrees Fahrenheit (time may vary slightly depending on your oven). Ultimately, they should come out set, with runny yolks perfect for dipping. 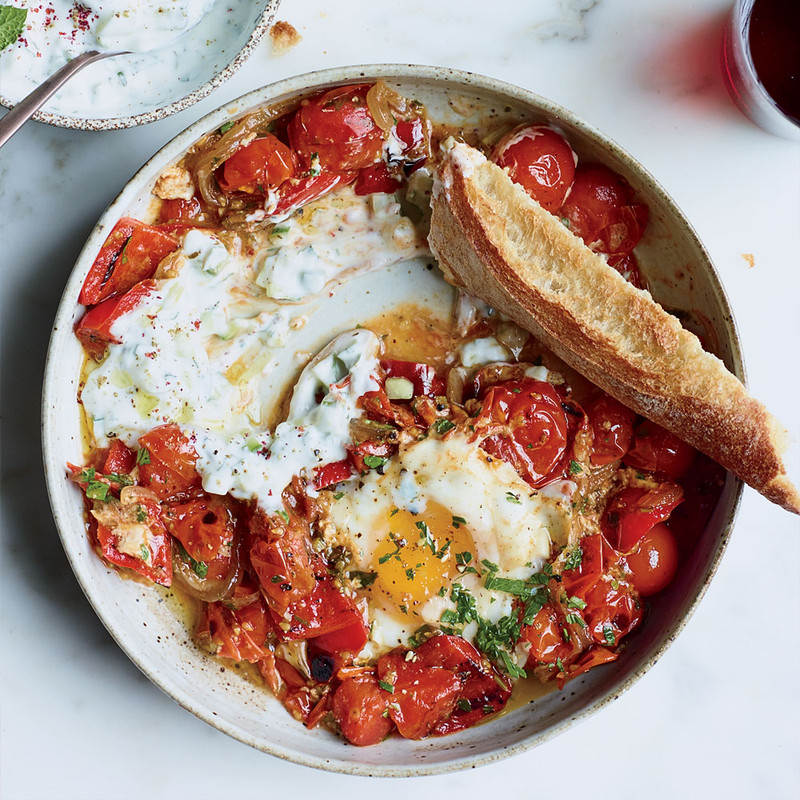 Use English cucumbers for the yogurt sauce

These are seedless cucumbers, and as such, Simmons likes to use them because you don’t have to scoop out the seeds. There are no crunchy bits, so she says you can eat the whole thing.

Za’atar is a spice blend, not a spice

Typically, za’atar includes thyme, oregano, and sesame seeds, alongside a blend of other dried herbs, such as coriander or cumin. It’s one of Simmons’ favorite spice blends, and she adds it to the yogurt alongside sumac (her other favorite spice), parsley, fresh chopped mint, salt, fresh squeezed lemon juice, and the cucumber.

When the eggs come out of the oven, finish them with a drizzle of olive oil and fresh parsley. Simmons plates them by scooping an egg and some tomatoes into a bowl, serving with a dollop of the yogurt sauce on the side, and adding a final squeeze of lemon juice on top.

You can use a fork, but bread is much better

Simmons likes to tear off pieces of bread to soak up the yolk and tomato sauce in the dish, which she says is “more fun” than using utensils.

Pair with a low-key drink

For brunch, Simmons says she doesn’t like to go too hard in the morning. As a result, her drink of choice for this recipe is a non-alcoholic mix of pomegranate juice, club soda, a squeeze of lemon juice, and fresh mint.