So you don't have to. 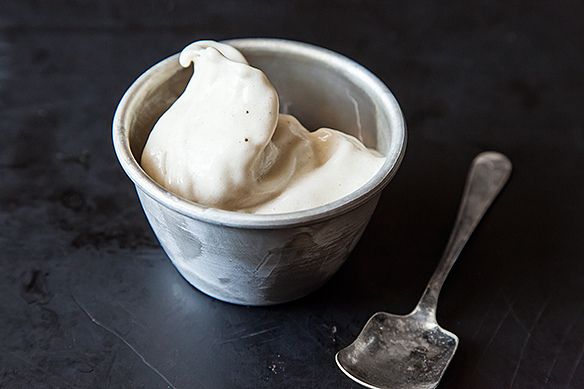 Recipes make lofty claims. Too many call themselves the best, while some take it a step further ("the world's best") and some are a bit more humble ("very good").

But perhaps the grandest, most far-fetched claims of all are those of "magical" two- or three-ingredient recipes that purport to produce great results with 10 fewer ingredients and much, much less work. "Turns out you've been doing too much all along!" they sing. "You don't have to buy extra ingredients or cream any butter or wait for dough to rise. You're doing it wrong: Life could be so easy!"

They run wild on the internet as panacea: They're the GET RICH FAST recipes, the con men of the blogosphere, smiling at me slyly.

But what if it's true? What if life could be easier? To see if I've really been doing too much work (mixing 15-ingredient cakes like a fool stuck in the 20th century), I put 5 of the most popular magical recipes to the test.

So did my life change, you're wondering? No, not really. The prospect of every single one of these recipes was equal parts puzzling and exciting, but once I tasted the finished product and moved beyond the gimmick, I was disappointed. Yes, there were a couple of recipes I'd return to (namely, the cheesecake and the pizza dough), but not one could go head-to-head with its fully-fledged namesake; in the end, they're knock-offs. They might be great as party tricks—or if you have a dietary restriction, or you're in a very desperate, very unusual circumstance—but they won't replace your stand-bys.

1. The recipe: Two-Ingredient Banana Pancakes, as seen on The Kitchn and Tasting Table 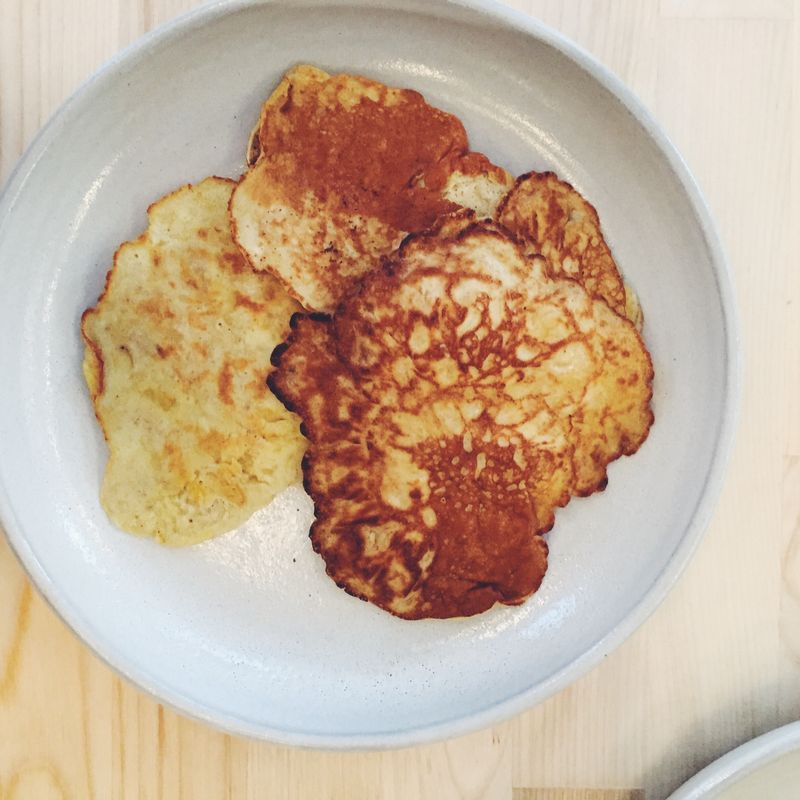 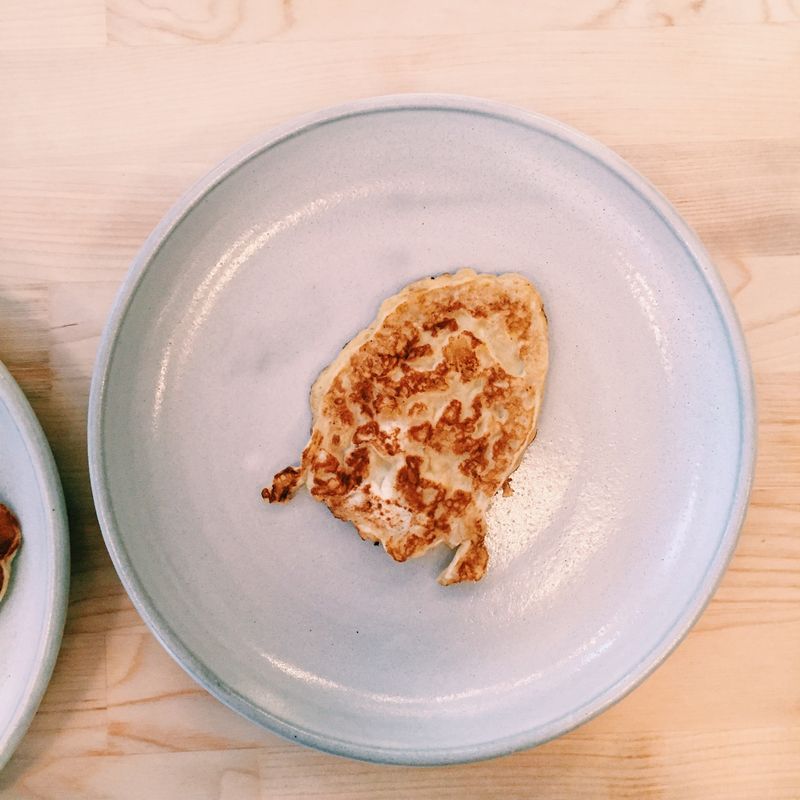 I was especially proud of the pancake on the right, as it resembled a toy rocket/squid.

The method: Mash up 1 ripe banana, add 2 eggs, and mix, mix, mix. You'll get a really soupy batter. You'll worry that you're about to make banana-flavored scrambled eggs. Heat up a griddle with some butter, dollop in 2 tablespoons of the loose batter, wait 1 to 2 minutes, then flip very, very carefully, as if you are handling a still-wet painting, and cook a minute more. Serve immediately.

The experience: While we all agreed that these pancakes could use some salt, cinnamon, and maple syrup, everyone who tried them was pleasantly surprised. They were definitely on the eggy side of the eggy-fluffy pancake spectrum, but the texture was chewier and breadier than we expected—akin to a hefty version of a banana-flavored crêpe. They're squishier and wetter than your normal pancake, with a flavor that, if you use enough butter in the pan, recalls the outside of French toast.

The verdict: Though these didn't stack up to traditional pancakes, yes, we would make them again. They're lacking lift and levity, but they're probably the best thing you can do with 1 banana and 2 eggs. Kenzi even said she might make them for dinner. 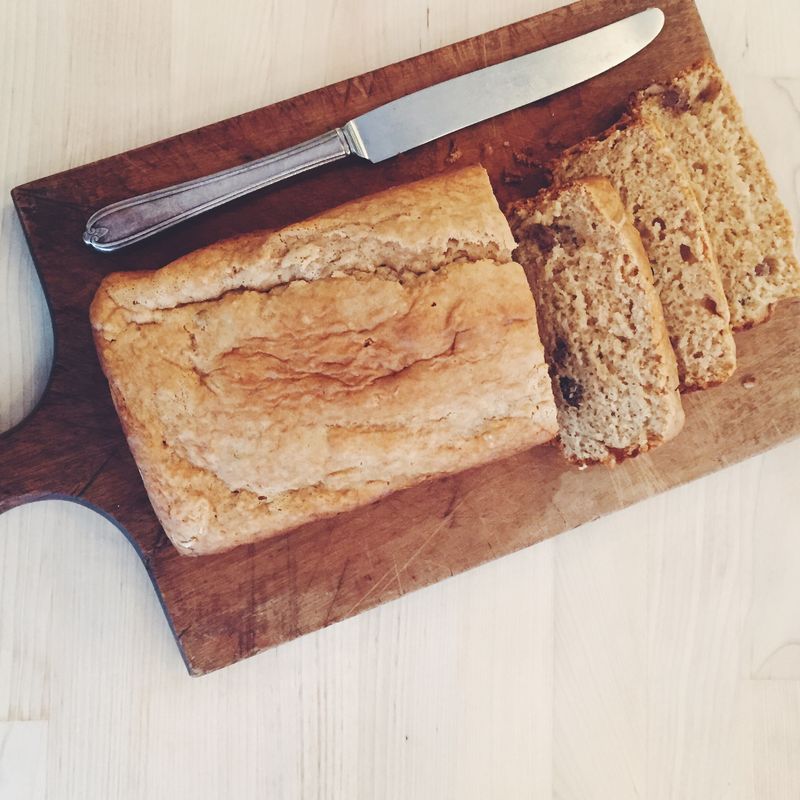 Can you tell what ice cream flavor we used from those mysterious chunks?

The method: Mix together 1 1/2 cups self-rising flour with 2 cups of softened ice cream (we chose Talenti butter pecan). Scoop into a loaf pan and bake in a 350° F oven for 45 minutes (ours took only 35).

The experience: This very short loaf (you can see how stout the slices are in the photo above) tasted more like pancakes than the banana pancakes did, but we attribute that to the butter pecan ice cream we used as the base. Flavor-wise, the cake was saltier than we expected (a result of the self-rising flour and, perhaps, that the flavor of ice cream is created with the cold temperature at which it is eaten in mind); texturally, it was buttery and dense, but with a pasty quality that dried out our mouths.

The verdict: No, we probably wouldn't make this again. If we happened to have a pint of melting ice cream on our hands and no blender with which to make a milkshake (note: this has never happened), we might make this cake—but we wouldn't be particularly proud to call it our own. We wouldn't bring it to a dinner party or turn to it for a snack. Yes, the cake is impressive if you keep in mind that it's made of only two ingredients, but in comparison to fully-formed cakes, it's not good—just not bad. It's probably just better to eat the melted ice cream.

3. The recipe: Three-Ingredient Japanese Cheesecake, as seen in this 4.8-million hit YouTube video and on Epicurious 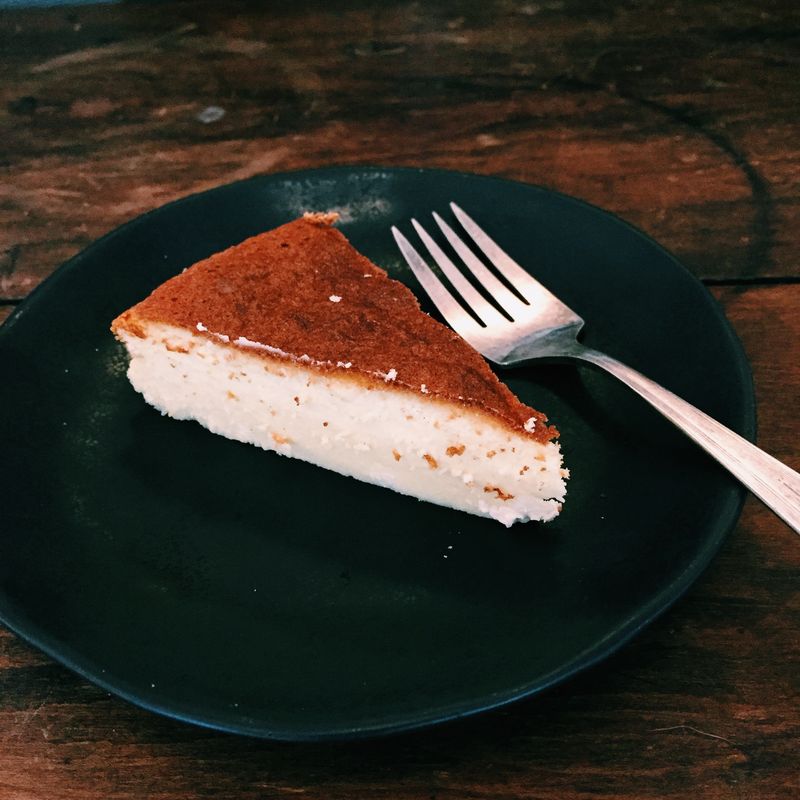 The method: Melt white chocolate in the microwave and mix in a whole block of room temperature cream cheese and 6 egg yolks. Whip the 6 egg whites to stiff peaks, then fold them gradually into the cream cheese mixture. Bake in a spring-form pan (the recipe says 8-inch, but we used an 8 1/2) in a water bath at 350° F for 45 minutes, then turn off the oven and leave the cake in for 15 minutes. Chill overnight.

The experience: I was so skeptical of this cheesecake, which was sadly short and with a burnished cap, neither of which were described in the method I was following. My knife didn't float through this cake—I had to apply more pressure than I was expecting—and it wasn't as smooth or soft as those cheescakes I've loved in the past. But while it might not compare to a towering, soft, yielding cheesecake (and there's no crust!), it is good in its own right: Smooth and lush and sweet, it tastes way more like eggs than white chocolate (the latter is practically undetectable); the Food52 tasters described it as a fallen soufflé and a firm, cheesy flan. 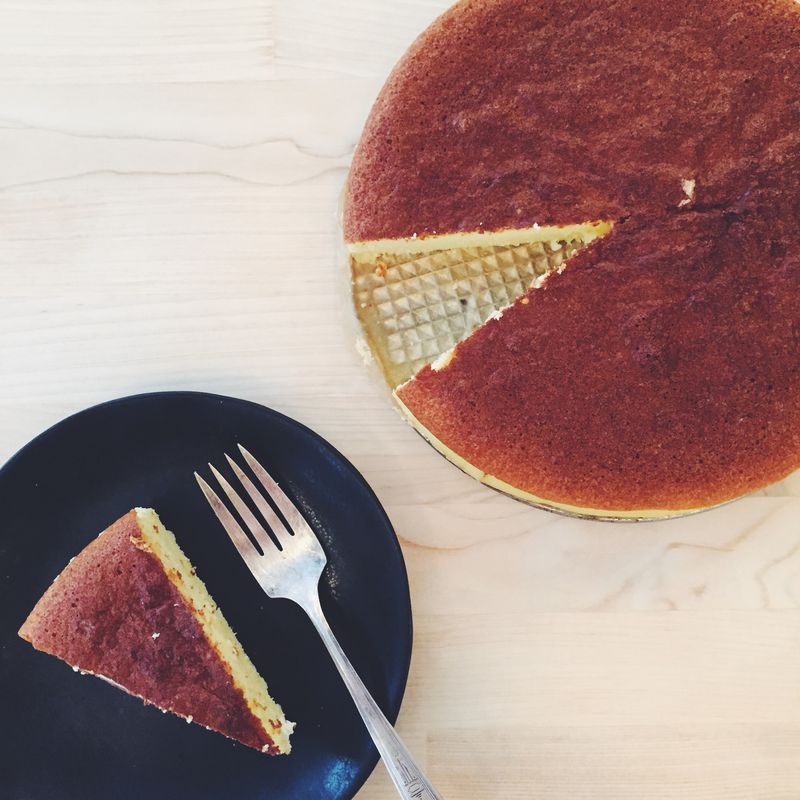 The verdict: Yes, we'd make it again. If you are the person who wants to soft-as-snow cheesecake, this dessert might not be for you. And it's missing the characteristic tang of cheesecake and would benefit from some salt and lemon zest. (More ingredients!) Lauren Kelley smartly suggested we try it again using goat cheese instead of cream cheese. That being said, this is much easier to make than a traditional cheesecake and would taste great topped with fruit compote or lemon curd. We would not be embarrassed to serve this to friends.

4. The recipe: Two-ingredient Maple Soufflé, as seen on Sugarlaws 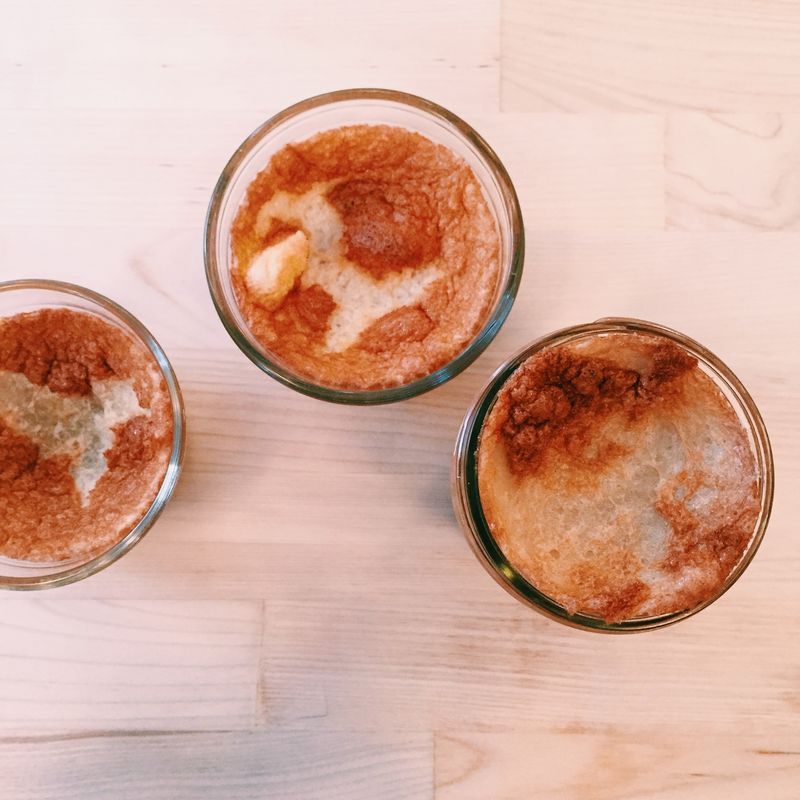 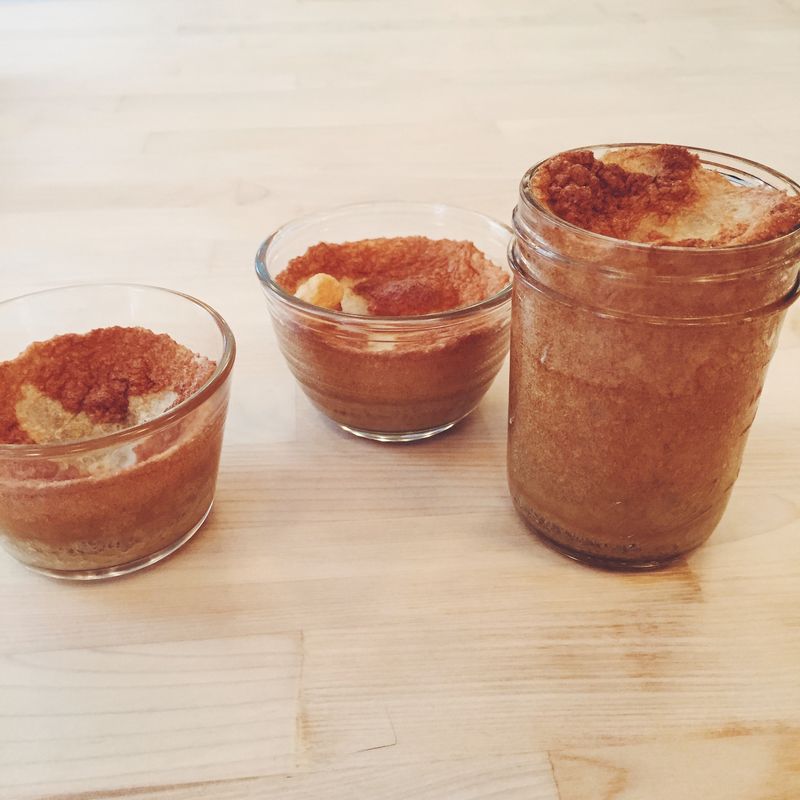 Is there a disappointment greater than a fallen soufflé?

The method: Mix 2 egg yolks with 1/3 cup maple syrup. Whip the 2 egg whites to soft peaks. Fold the maple mixture into the egg whites, pour into ramekins, and stick in a 400° F oven. Immediately lower the temperature to 375° F and bake for 10 minutes, until puffed and browned.

The experience: I had a hard time incorporating the maple syrup mixture into the egg whites, and when I poured the mixture into the ramekins, I noticed that the syrup sank to the bottom. I cried failure. But, 10 minutes later, it seemed the syrup had osmosed throughout the egg mixture. The soufflés were nicely browned and, fleetingly, quite inflated. When we punctured them, we found a damp, marshy mush—there was the same sponginess that characterizes a normal soufflé, but here, that sponge was saturated with syrup.

The taste is not surprising: If you've ever eaten scrambled eggs that got too cozy with the maple syrup dripping off your pancakes, you'll understand. If you're looking for a different textural experience in which to experience this same flavor combination—or to impress some friends with food balloons—this works well enough. 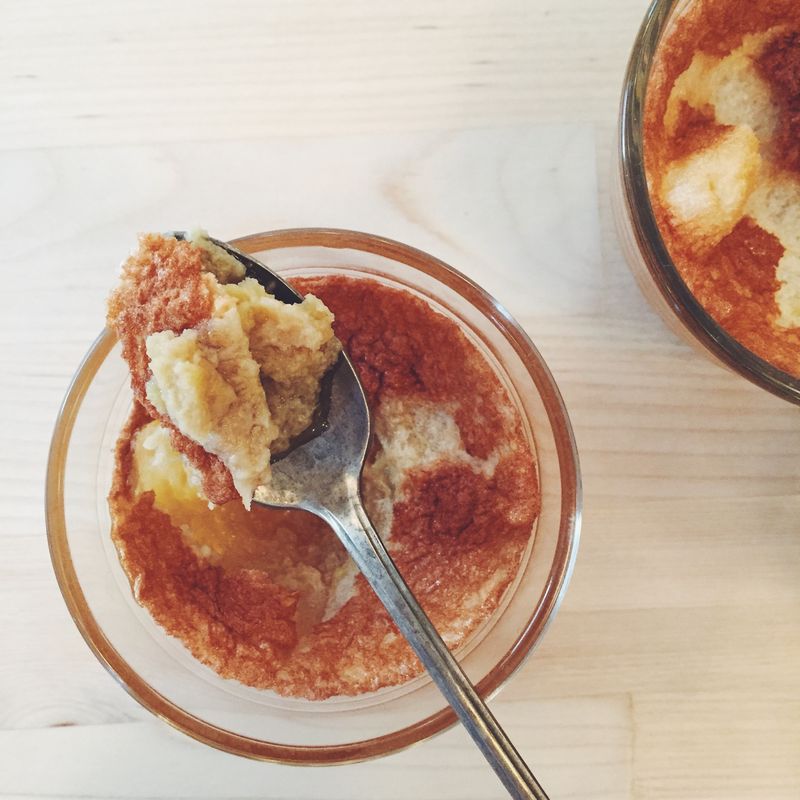 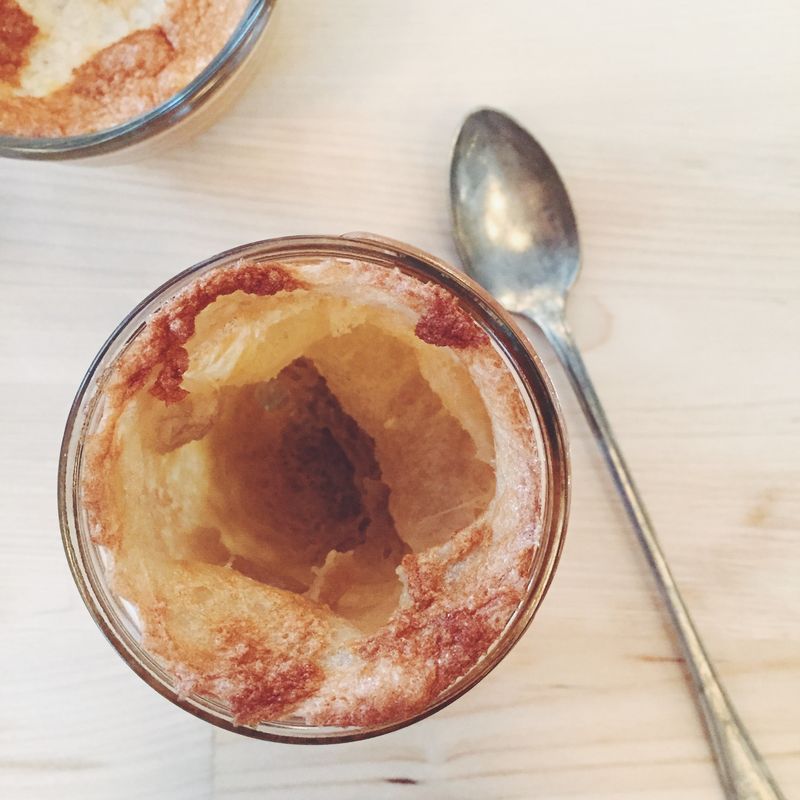 The verdict: No, we wouldn't make it again. We'll stick to scrambled eggs and save the precious maple syrup for something better. If you like damp food like soggy French toast or day-old custards, this might be for you.

5. The recipe: Two-Ingredient Pizza Dough, as seen on Impatient Foodie 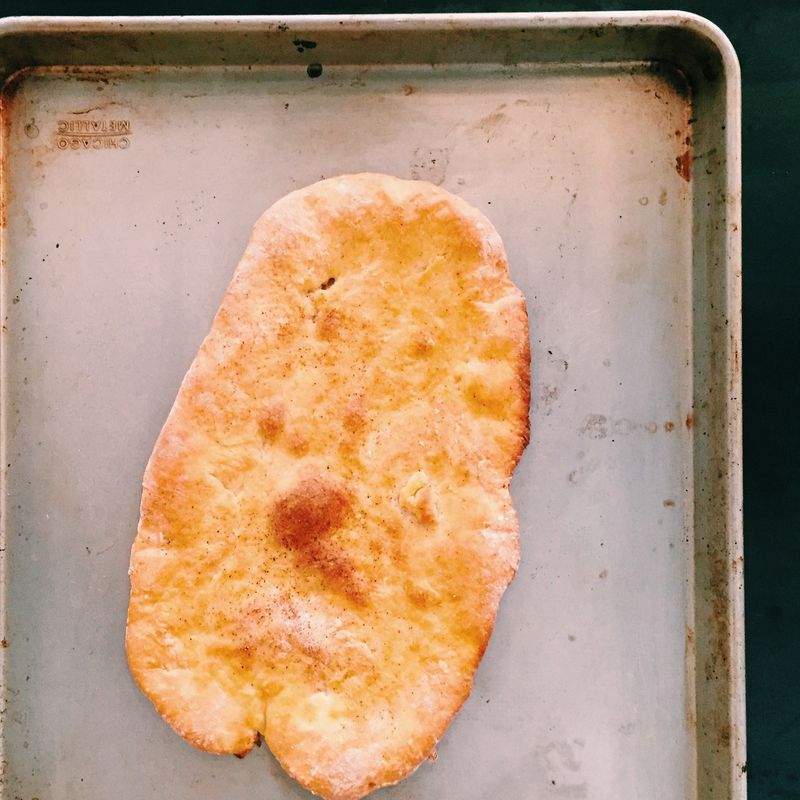 The method: Mix 1 cup of Greek yogurt (we used full-fat) with 1 cup self-rising flour. Knead for 8 to 10 minutes on a lightly-floured surface, then shape into a "pizza shape" (I used a rolling pin) and bake in a 450° F oven for 10 minutes. (The recipe instructs to put it "straight in the oven"—I put one piece of dough directly on the oven rack and placed the other on a preheated baking sheet.)

The experience: I couldn't believe how easy this dough was to handle. On the intial mix, it seemed like it would very, very dry, but the yogurt hydrated the flour, and it ended up being slightly sticky. I added additional self-rising flour as I kneaded and rolled the dough, and, rare for me, experienced no dough anxiety as I went along.

I was happy with how the dough was chewy and airy in some parts and crisp and cracker-y in others. I wish I had topped it with sauce or vegetables to see how all the different components interacted, but as flatbread, this dough was enjoyable, if missing the complex flavor that comes from a yeast rise. There was a slight chemical taste from the self-rising flour (probably my fault—I should have kneaded with all-purpose). Caroline said it reminded her of a better version of the dollar pizza crust (and she insisted that that was a good thing). 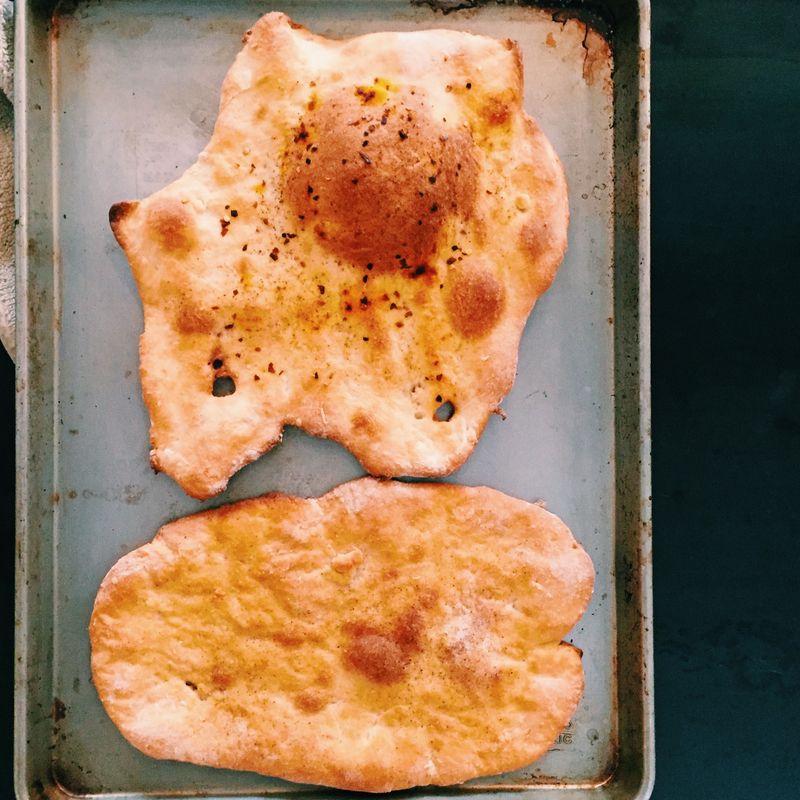 The verdict: Considering how poor my last pizza dough-making experience went (screaming fight! dough in the trash! many tears!), I would certainly make this again. Without waiting for dough to rise, you'll have something very closely resembling real-life pizza dough. And while you'd never mistake it for a wood-fired crust from Roberta's, it's much better than the large sponge you find at the grocery store. Plus, you don't have to play yeast roulette.

So what did we learn?