The Truth About Caramelizing Onions

The Truth About Caramelizing Onions

"It might be the most valuable journalistic work I’ve ever done."

That's reporter Tom Scocca, who has covered presidential elections and the Supreme Court nominations, reflecting on a piece he wrote five years ago for Slate in which he snuffed out recipe writers' biggest, baddest fib: the time it takes to caramelize onions. 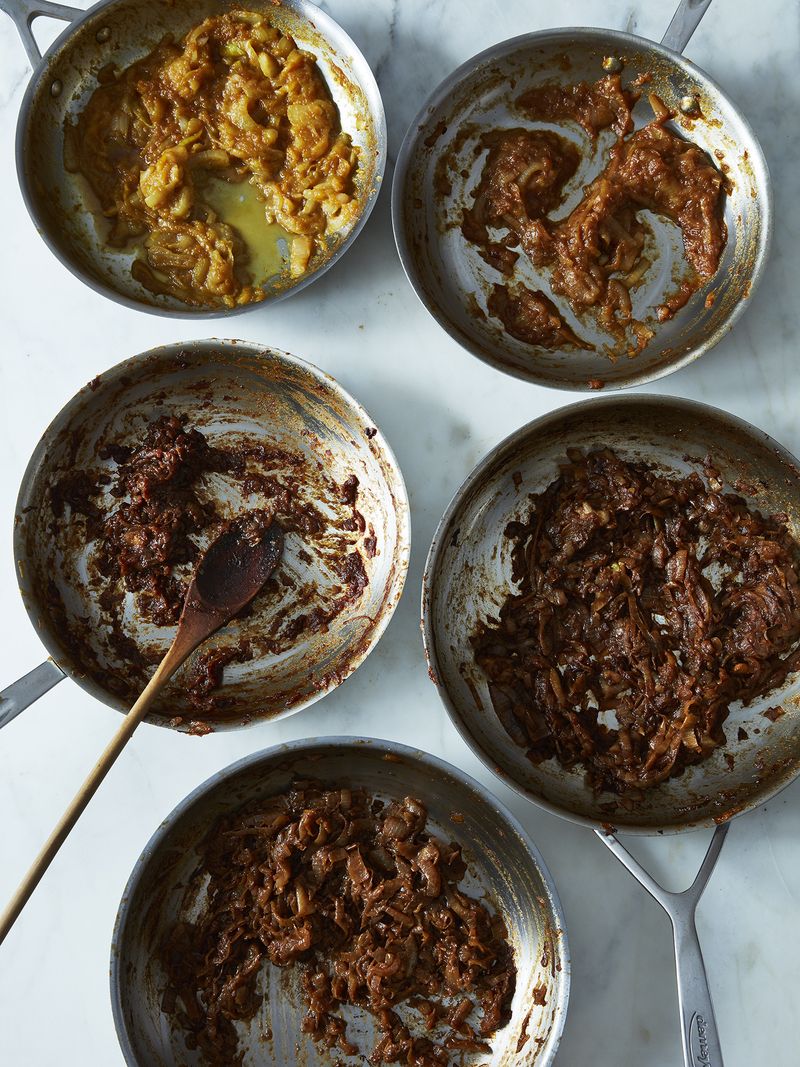 The article, which indicted everyone from Melissa Clark (10 minutes to become "soft and caramelized," she says!) to Madhur Jaffrey (5 minutes for a "medium-brown colour"!), resurfaced last month, when Scocca realized that the featured Google search result for "How long does it take to caramelize onions?" drew—and, to add salt to the wound, directly from his article—on the very information his entire piece had set out to expose as false: "about 5 minutes."

(Since this revelation, the Google search results have been adjusted, now pulling a more relevant quote from his original Slate article.)

On Food52, we, too, have a lot of mixed information about onion caramelization in our archives. Some recipes say it takes 45 minutes to 1 hour to caramelize diced onions, while others recommend 30 to 40 minutes for thin slices.

The inconsistency isn't surprising: Our recipes are developed in the kitchens of home cooks who are using pans, different stoves, and different types of onions—and who are judging with their eyes and ears rather than by the time on the clock.

But to see how long caramelizing onions really take—and what they look like along the way—we caramelized three pans of onions (three onions, 1 tablespoon of butter, a stainless steel pan) for 15, 30, and 60 minutes over medium-high heat. Whenever the fond (those caramelized sugars that stick to the bottom) started to build up, we deglazed with a tablespoon of water, scraped up all of the flavorful bits, and started the whole process again. 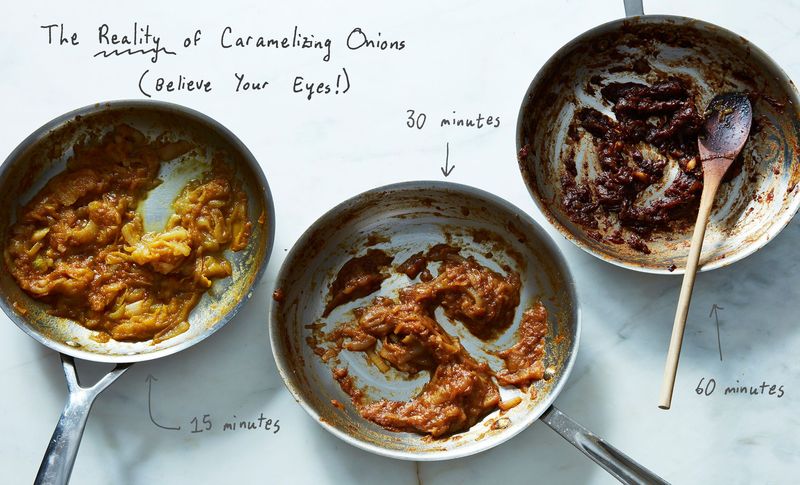 Which of these look "caramelized" to you? Photo by James Ransom

You'll see in the photo that the onion volume reduced dramatically (after 60 minutes, three onions had turned into about 1/2 cup of deeply caramelized onion shmoo); the color changed from yellowish orange to a deep auburn; and what was once-astringent and watery turned candy-sweet and butter-soft. With this method, there was no defying time (and no outsmarting patience). But then again, some cooks might consider the 30-minute pan to be caramelized to perfection (as opposed to obliteration)—and for some applications, a half-hour might be plenty of time, indeed.

Next, we tried two tricks that are supposed to speed up the process: (1) adding baking soda (read more about the science behind that here), and (2) starting with the pan covered. (Both techniques also call for a bit of added sugar in order to speed up the caramelization process.)

In the end, neither method was significantly faster than the nothing-added 60-minute technique. But the onions they yielded differed in sweetness and softness in a way that might actually be preferable to you depending on how you're putting the alliums to use. 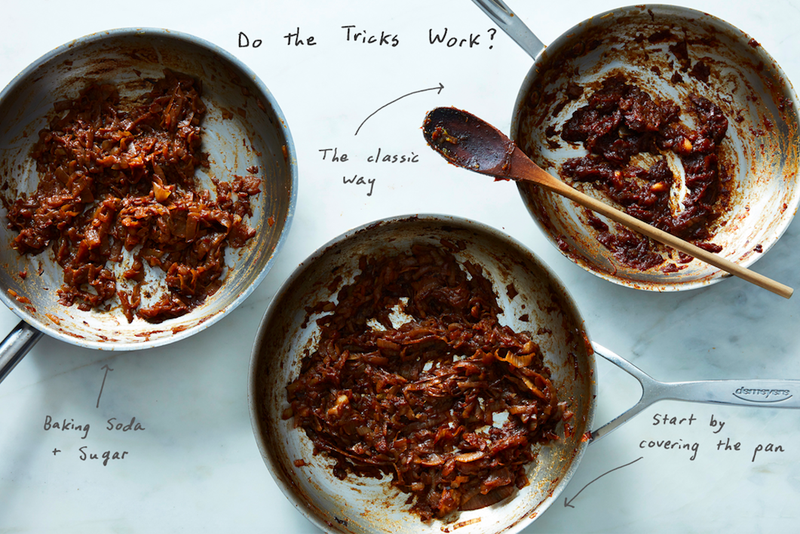 Would you consider all of these to be well caramelized? Photo by James Ransom

So it doesn't take 5 or 10 minutes to caramelize onions. So the shortcuts might not be as speedy as they claim to be. But you can still get a pan of sweet, soft onions in 30 to 40 minutes.

But are they "caramelized"? Perhaps the problem lies not with our inconsistency about cook time but with our lack of specificity in regards to just how those onions should look, taste, and behave. What does caramelized mean? (I know—big sigh!) Are you looking for falling-apart, jammy onions? You'll need an hour. Or are you looking for onions that are just starting to turn from yellow to brown? You might only need 20 minutes.

How long does it really take to caramelize onions? Read on for the truth, and some thoughtful suggestions on method and shortcuts. Give 'em a test run with our recipes like, Cartwheel Pasta with Peppers & Onions and Broccoli with

How long does it really take to caramelize onions? Read on for the truth, and some thoughtful suggestions on method and shortcuts. Give 'em a test run with our recipes like, Cartwheel Pasta with Peppers & Onions and Broccoli with