Do These Tricks Really Make Eggs Easier to Peel? We Tried 'Em

Do These Tricks Really Make Eggs Easier to Peel? We Tried 'Em

Judging from all the advice on how to cook hard-boiled eggs, you'd think you'd need a Masters in Eggistry to put together a toast-topping salad.

Others of you, however, don't understand why anyone needs advice on cooking something so simple in the first place: "If you can't hard boil an egg," a commenter on our latest hard-boiled egg tutorial weighed in, "you weird teenagers should return those stolen credit cards to their owners and walk into the sea, never to purchase kitchen products again."

Regardless of how simple (or complicated) it is to cook an egg, can we all at least agree that peeling those eggs can be downright defeating? The shell fragments cling onto the whites like glue and, in Doomsday scenarios, hold chunks of the smooth white flesh captive, leaving something chewed-looking behind. Gah!

While we stand behind our favorite method (peel your eggs when they're submerged in water), we wanted to try two precautionary tricks that can be applied during the cooking process—so that you're not condemned before you even get to the water bath stage.

In On Food and Cooking, Harold McGee writes, "If you end up with a carton of very fresh eggs and need to cook them right away, you can add a half teaspoon of baking soda to a quart of water to make the cooking water alkaline (though this intensifies the sulfury flavor)." Why is this the case? According to PureWow, the alkaline baking soda helps increase the pH of the white albumen (that is, makes it less acidic), loosening the bond between the egg whites and the inner membrane of the shell.

2. Add vinegar to the boiling water.

I first heard tell of this trick from contributing writer Emma Laperruque, who recommended it for her naturally-dyed pickled eggs: "A fellow line cook told me this a couple years ago and I've sworn by it ever since," she told me.

According to Juan Silva, a professor of food and science technology at Mississippi State University, via Chowhound, "the eggshell is made of calcium carbonate… and adding vinegar to the water will dissolve some of the calcium carbonate." Nick Korbee, chef at New York's Egg Shop and author of the eponymous cookbook also recommends a spoonful of vinegar in the cooking water.

To test the tip, Mathew Jedeikin of Buzzfeed used 1 tablespoon white vinegar for every quart of water. 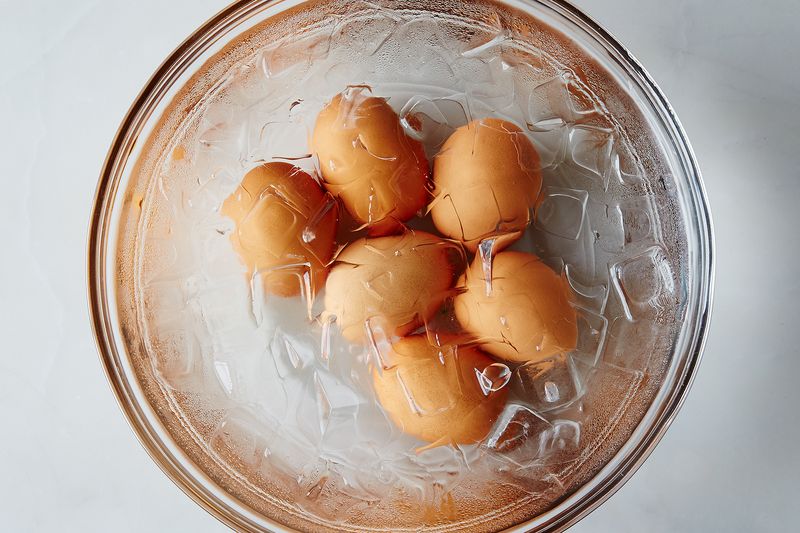 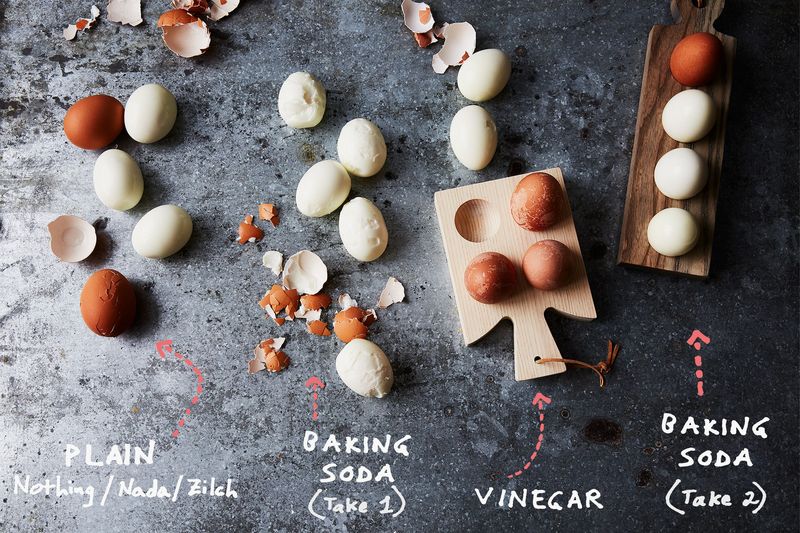 So a-peel-ing. Photo by Bobbi Lin

What happened?! We suspected foul play (was the Vinegar Lobbying Association at work here?), then recalled that the pot of water with the baking was on a weaker burner of the stove. The water never came to a rolling boil but instead was at a bare simmer at the point when the eggs were added. A-ha!

So we filled up another pot with baking soda-spiked water, moved it to a more powerful burner, brought the water to a vigorous, active boil, and then added five additional eggs, proceeding as usual. This time, the egg shells practically fell off, like loose-skinned satsuma peels. A dream come true!

So What Did This Teach Us?

The takeaways of today:

1. Make sure your water is hot.

There is well-researched advice that suggests a hot start (adding eggs to hot water) makes for easier-peeling than a cold start (covering eggs with cold water and putting the pot onto boil). But it's not just about hot versus cold—that water needs to be at a rolling boil. As López-Alt explains, "easy peeling requires a full 212° F blast of heat." The variable that made the most significant difference in our test was the temperature of the water, not the substance added to the cooking water. When the water was not quite hot enough when the eggs were added, those eggs were exasperating to peel.

2. For extra insurance (or the placebo effect?), you can use vinegar or baking soda.

It's not going to make the eggs taste different, and it might make them easier to peel. Many who repeat Harold McGee's recommendation neglect to mention that he was referring to farm-fresh eggs—not eggs you've picked up at the supermarket, but eggs that were plucked from under a hen just days earlier. Most of us don't have regular access super fresh eggs, so it's hard to test whether the addition of baking soda made a difference. But it didn't have a negative result, either.

Personally, I had the best time peeling the eggs I handled as soon as they were cool enough to work with. The eggs I got to a bit later—half-hour to an hour after they were cooked—were slightly more difficult to peel, regardless of how they were cooked. (For this reason, I like to peel all my eggs as soon as I can, dry them off, then store them in an airtight container in the fridge for eating throughout the week. But other people prefer to store hard-boiled eggs unpeeled—it's up to you.) 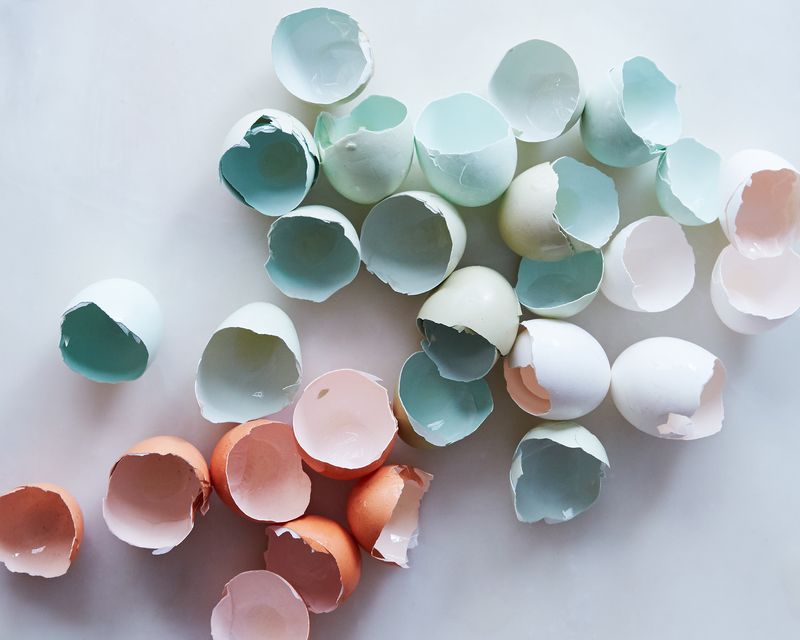 And what do we know from previous experience?

4. Get those eggs into an ice bath.

Even if the ice bath only makes a slight difference, it stymies carry-over cooking, preventing your yolks from turning gray or chalky. And, if you crack your eggs before putting them in the bath, you may have what Russ Parsons of the LA Times calls "the real winners." These, Parsons says, are "by far the easiest to peel."

5. If all else fails, steam them in your pressure cooker.

Many of you swear by your pressure cooker (and your InstantPot, specifically) for perfectly peelable eggs. In What Good Cooks Know, the fine people at America's Test Kitchen explain that steaming eggs makes the egg white proteins "shrink away" from the shell membrane for a pleasing peel.

6. And if you're truly concerned, poke a pinhole in your egg shell.

This is one of the classic "hacks" you'll see all over Pinterest (and Amanda Hesser had great success!). By using a thumbtack to create a tiny hole on the bottom of each egg pre-boiling, you create an exit route for the small amount of air that expands as you cook the egg. Same claim that by directing this air flow, you'll get rounder, smoother eggs (and, if Amanda's photos are proof, they're right!). 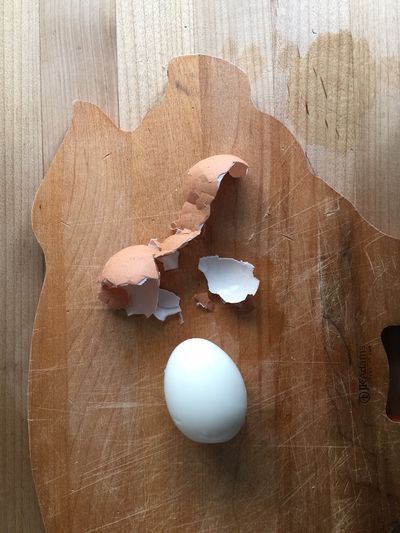 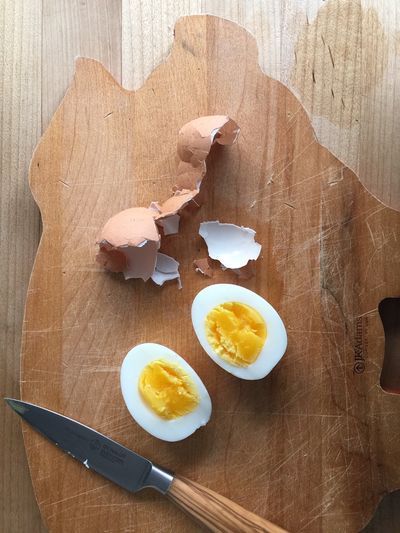