Despite falling under the considerably stuffy-sounding category of "composed salads," one that doesn't exactly scream fun, a Cobb Salad done right should never be a complicated affair. In my favorite of its various origin stories, the Cobb Salad was devised as a way to make a meal out of leftovers: A hungry man entered the kitchen of the Hollywood Brown Derby, a chain restaurant in Los Angeles, 'round about midnight on an ordinary day in 1937, and rummaged through the fridge.

Maybe the ravenous scavenger was the restaurant's chef, one Paul J. Posti; more likely, it was the owner, one Robert Howard Cobb (hence the name). In any case, he found cooked bacon and chicken, boiled eggs, blue cheese, a smattering of fresh vegetables and lettuces, and cobbled them together (my pun) to make a meal. 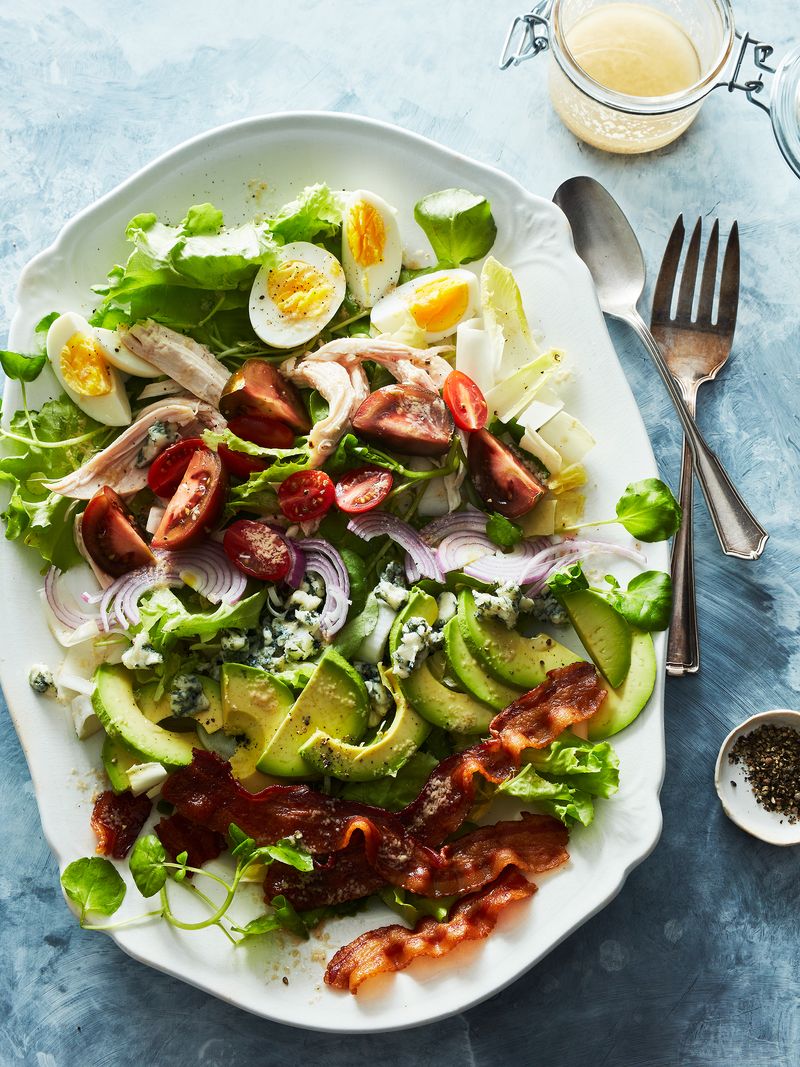 This combination is the purists' Cobb: predictable, with all ingredients finely chopped and sprinkled in rows across the lettuce bed, a fortifying meal (4 proteins!) despite its prim appearance. (One variation of its origin story states that the eater of the salad had just undergone dental work, hence the mincing of ingredients.) Like Larry David's dinner companion, the self-proclaimed grandson of the the Cobb's inventor, you'd expect this composition—particularly the presence of bacon, egg, grilled chicken, and blue cheese—upon ordering a Cobb at any restaurant.

It is safe bet on a strange menu, as reliably decent as onion soup.

But Cobbs can play the whimsy card, too! They can get wacky and unbuttoned, like the wake-you-up midnight snacks they were meant to be. The following is a guide to making one, whether you prefer that strictly expected combination or the result of a hangry dive through your own fridge.

While restaurants might offer just one type of lettuce in their Cobbs, recipes more frequently feature a mix of talkative greens: watercress, chickory, endive, or all three, mixed in with crisp iceberg (or another mild leaf to contrast the feistiness). 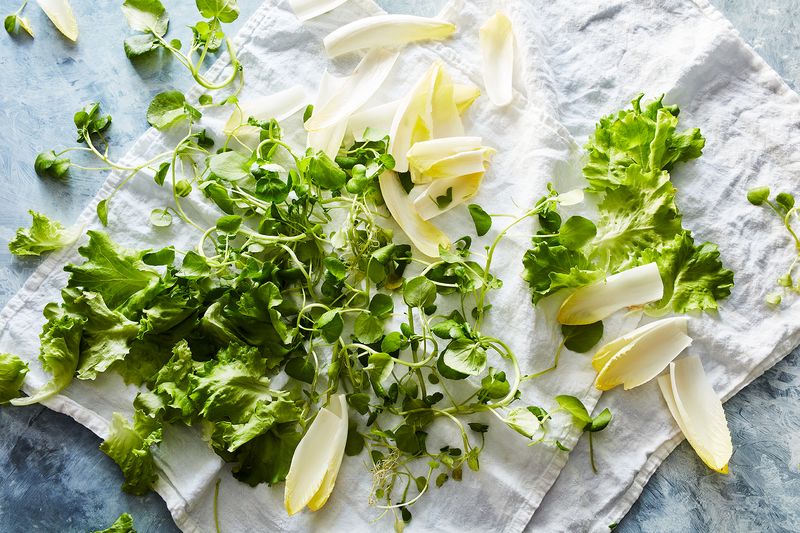 Select and clean your greens, ideally in a range of flavors and textures. (I like a mix of watercress, iceberg, and endive.) If it you've got a toothache or like to eat salads with a spoon, finely chop this trifecta; or tear them into pieces; or keep them whole and leafy as they were born to be.

Toss the greens together, and spread them across a plate (for yourself) or platter (if entertaining). In the case of the latter, you're going to feel very much like Martha in a sun hat in the Hamptons, and you will like it.

Non-negotiable: lusty raw vegetables atop your Cobb salad. There should be quite a lot of pungency in the mix; purists will expect raw red onion, chives, tomatoes, and avocado. But feel free to riff based on what you have—radishes would feel right at home, as would shaved fennel. In the summertime, you could buffer the requisite pungency with fresh corn, cucumbers, or English peas. Will it be a Cobb then? You decide.

(I say yes, so long as it's bright, assertive, and overly abundant.) 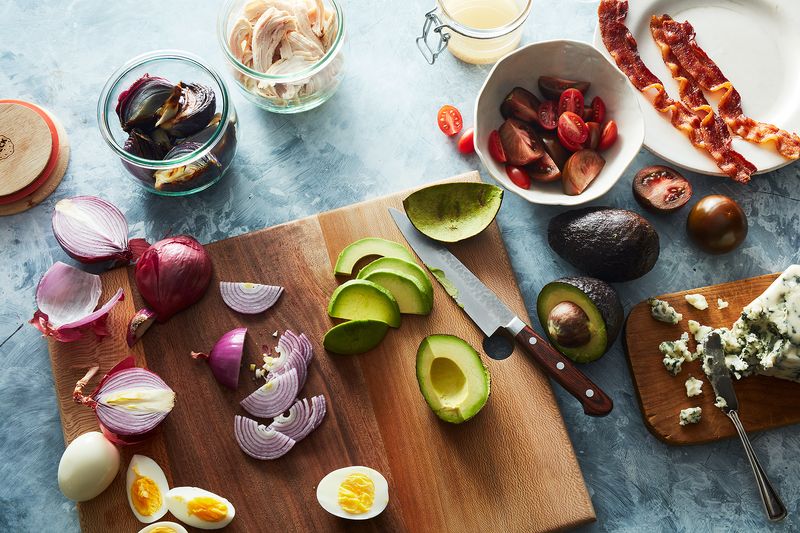 If you'd like to make a winter-leaning Cobb or have leftover roasted vegetables in your fridge, bring them out! Rob Cobb would have done the same.

Finely chop or dice your vegetables of choice, or if you'd rather leave them in big hunks, do so—I am not the boss of you. Then lay them across the salad in dramatic, self-contained stripes. This is the "composed" part of the Cobb in action—if you want to flick your pinky out while you're plating, that would be acceptable. (It will taste the same if you don't compose it and instead throw everything in a bowl willy-nilly... but what's the fun in that?)

I've got to be honest here: Roquefort is Non-Negotiable Cobb Component #1, but if you use another kind of blue cheese, the world will keep turning and I will never know.*

*I wish I could tell the many detesters of blue cheese to use "any sharp, tangy cheese," or "any leftover cheese you happen to have in the fridge at all"—but there's something about the puckery punch of blue that no imposter can replicate.

No less than three in addition to the cheese you just added: Crisped and crumbled bacon, hard-boiled eggs, and grilled chicken breasts (chopped into cubes) are the proteins you'd expect on a classic. If you poach and shred your chicken instead—or, gasp, use rotisserie in its place—nobody will cry about it. (The Brown Derby at Disney World uses turkey!) If you prefer a 6-minute egg, so be it. Swap bacon for crisp pancetta, if you must.

These get piled into lanes across the salad, too. 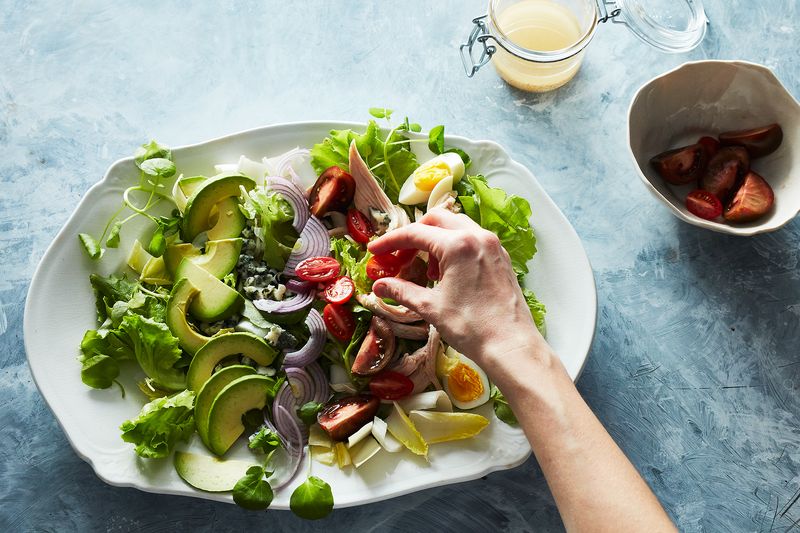 Composing turns out to be very easy indeed. Photo by James Ransom

What's that? Tempeh bacon for the real bacon? Chickpeas for the chicken? I can't publicly condone a vegetarian—or, shriek, a vegan—Cobb without fear in my heart; Deb Perelman might come after me. But let's just say, flavor-wise, they'd get the job done.

With so many assertive ingredients in your Cobb, a simple red wine vinaigrette (mustard, red wine vinegar, and olive oil, briskly whisked) is all you need to bring it together. But, as those who order Cobbs with frequency will tell you, there are competing ideas about what's best, and what's classic, to drizzle atop it. 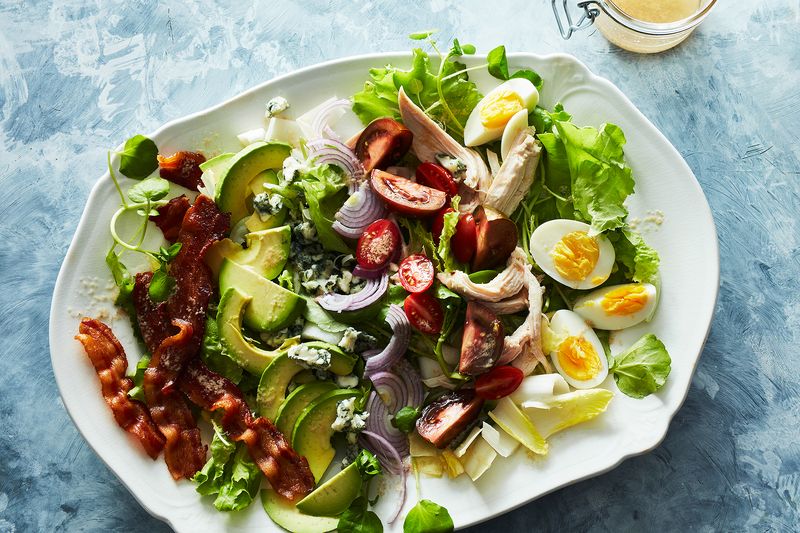 I say avoid others' opinions. What's in your fridge? Blue cheese dressing would be very Steak House Cobb of you, and French dressing is an apparent classic. I can't actually think of a dressing that would ruin a Cobb.

Serve it on the side, or spoon it across the top before serving. You'll only toss your Cobb at this point if you're a real rule-breaker; the classic way is to present it is neatly composed. Eat it with a fork and knife, as well as a white dinner napkin in proximity; or with your fingers (bacon dipped in salad dressing is a very good late night snack). I like mine somewhere in between prim and irreverent, with the ingredients in big hunks and not-too-perfect, Cobb-like rows.

This article was written by Amanda Sims from Food52 and was legally licensed through the NewsCred publisher network. Please direct all licensing questions to legal@newscred.com.