Lamb is famous for its supporting role in spring holidays like Easter and Passover, but in the Mediterranean and Middle East, it’s often a centerpiece dish for winter celebrations. “My grandmother and mother cooked a lot with lamb, and it’s one of the meats we ate most when I was growing up,” says Vienna-based cookbook author, chef, and restaurateur Haya Molcho. “It’s the best for slow-cooking.”

Molcho grew up in Tel Aviv and started helping her grandmother cook when she was only three years old. While touring across the globe with her husband, legendary mime Samy Molcho, she picked up other culinary influences from Iran, Russia, France, and Germany that she weaved into her own cooking, which she refers to as “nomadic cuisine.” 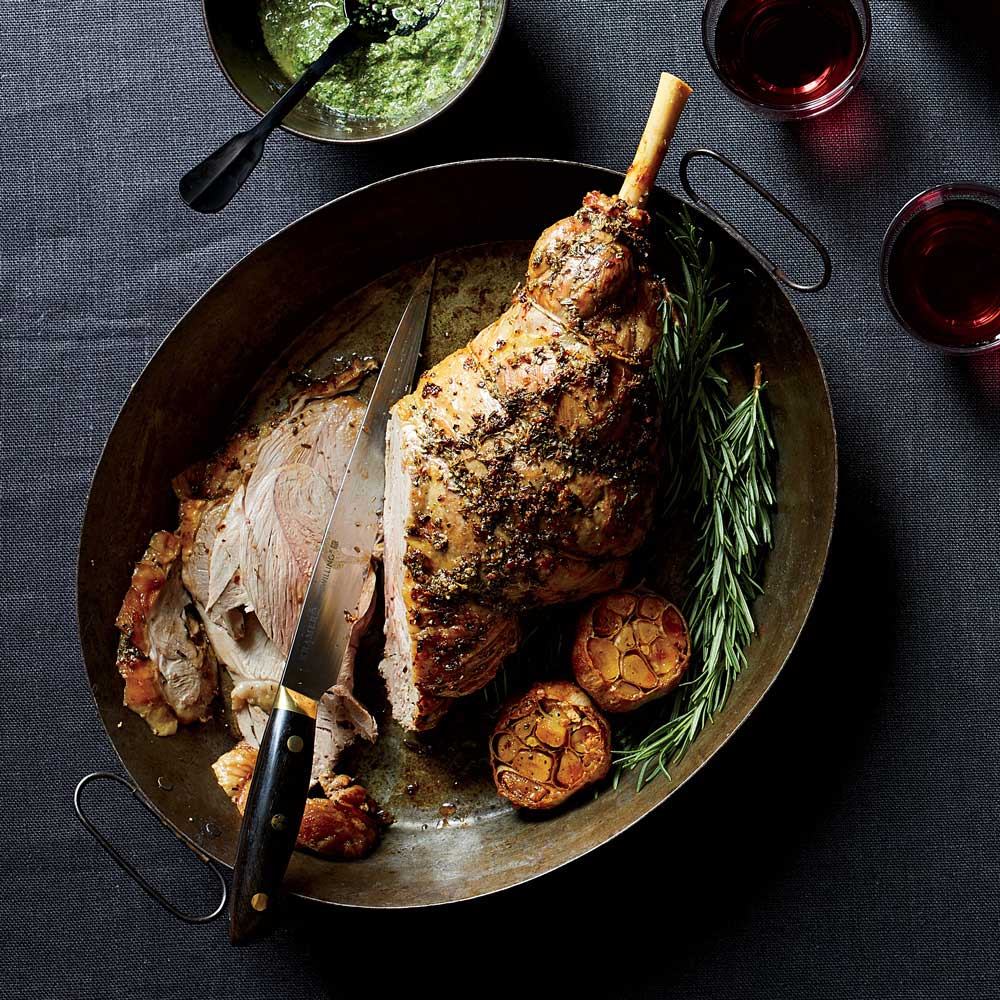 At the latest outpost of her Mediterranean eatery NENI, which she runs with her three sons at Paris’ new 25hours Hotel Terminus Nord, she serves lamb a few ways: minced in pita, braised with tahini, and kebab-style with beef. But in her latest cookbook, Tel Aviv, she spruces up a shoulder of lamb in a more localized, Israeli style—with grapes. “This is very Tel Aviv,” the chef says. “If it’s season, I put whole grapes in the dish, squeezing some of them with my hands to bring out that sweetness.”

This season, trade out your traditional turkey for lamb as tender as you’d find in some of Tel Aviv’s best bistros by embracing these five tips for a foolproof roast.

“The younger the lamb, the less it tastes like lamb,” says Molcho, who recommends selecting a fresh, young shoulder or leg. How to know if it’s fresh? “You have to trust your butcher,” she says. “It’s not like fish where you can tell the freshness through the eyes.”

Pick it up and smell it, she recommends. If you’re not smelling anything, that’s a sign the lamb is fresh. Two other clues: the meat should be rosy pink or red (not bright or bloody) and firm.

“You always season the lamb first,” the chef says, “never when it comes out of the oven.”

The recipe is simple: herbs, olive oil, and a sprinkle of fleur de sel. Slice half-inch to one-inch incisions across the surface of the meat and insert slivers of garlic. Then, massage the lamb with olive oil, rosemary, and salt, and lay it in a roasting pan on a bed of herbs like rosemary sprigs, thyme, and sage. If you’re roasting a whole shoulder, add a quarter liter of water to the pan, top the lamb with tin foil so it retains moisture, and place it in the oven at 325 degrees for three to four hours.

Timing is everything—and the biggest mistake you could make is rushing the roasting process. “Lamb should never be ready in less than three hours,” the chef says. “Sometimes, I even slow-cook mine for four or four-and-a-half hours.”

After an hour or hour and a half, baste the lamb with the broth, and, for the last 15 minutes, remove the foil and up the temperature to 500 degrees to achieve a crisp, brown crust.

“When you take the lamb out of the oven, you want the center to be rosé in color, not too bloody,” Molcho says. “When you slice it, the meat should fall off the bone.”

“The sauce is the cooking juice from the lamb,” says Molcho. “You don’t need to add any other sauce. But if you want something thicker, remove the liquid from the casserole and reduce it with butter for a touch that’s more French.”

“If you can, grill lamb over an open fire for a smoky flavor,” Molcho says. “Depending on the cut, you may still have to slow-roast it in the oven, but adding a bit of fire will make it more flavorsome.”

This article was written by Lane Nieset from Food & Wine and was legally licensed through the NewsCred publisher network. Please direct all licensing questions to legal@newscred.com.